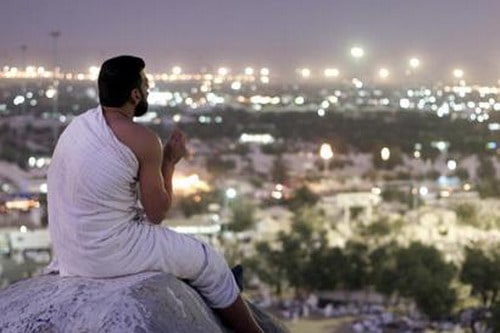 In Arabic, the word ‘Umrah is derived from I’timaar which means a visit. However, ‘Umrah in Islamic terminology, means paying a visit to Ka’ bah, performing Tawaaf (circumambulation) around it, walking between Safaa and Marwah seven times. A performer of ‘Umrah puts off his Ihraam by having his hair shaved or cut. ‘Umrah can be performed along with Hajj and in other days as well.

‘Umrah can be performed during anytime in the year, there is no fixed time for ‘Umrah.

The Pillars of `Umrah are four:

a)     Ihraam: which is assumed at the Meeqaat.

c)     Sa’y: walking between As-Safaa and Al-Marwah, which consists of seven circuits.

d)    Tahal-lul: which means coming out of the state of Ihraam; becoming lawful what was previously prohibited during Ihraam.

During ‘Umrah, pilgrims do not go to Minaa, ‘Arafaat and Muzdalifah or throw pebbles on the Jamrahs (stone pillars representing devils) or offer animal sacrifice. These rites are only performed during Hajj.

How to perform ‘Umrah:

1.     When the one who wants to perform ‘Umrah arrives at the Meeqaat, it is recommended for him (both man and woman) to take a bath if convenient, including menstruating women and those experiencing postnatal bleeding. The man perfumes his head and beard but not his Ihraam garments. There is no harm in what remains of it after Ihraam. There is nothing wrong if it is not possible to take a bath at Meeqaat.

2.      Men are to change into their clothing of Ihraam while the women only need to make their intention at that time in the clothing they are already wearing. There is no specific clothing designated for women, except that they are prohibited from wearing the Niqaab (face-veil) and gloves. Instead, they may cover their hands with the lower part of their khimaar (head covering), while using the upper part of their jilbaab (outer garment) or a separate piece of fabric to cover their faces by drawing it down, if there is need to do so.

As for men, they must assume their Ihraam at the Meeqaat by wearing two pieces of fabric called the Izaar and the Ridaa’. The Ridaa’ covers the top half of the body, while the Izaar covers the lower half. No other clothing is allowed to be worn in addition to these – no underwear, no pants, no shirt, no turban, no hat, etc. are to be worn.

Then the pilgrim makes the intention at the Meeqaat to begin the rites of ‘Umrah by entering the state of Ihraam. The intention must be made in the heart, while the statement made afterwards is: “Labayka ‘Umrah” or “Allahumma labbayka ‘Umrah”. This statement begins the rites of `Umrah. So the first pillar of `Umrah is the Ihraam. The intention is made in the heart, while the tongue recites the opening Talbiyyah. And if you wish, when uttering Talbiyyah, you may state a condition to Allaah fearing that which may prevent you from completion of the ‘Umrah whether illness or fear – saying “in habasanee haabes fa mahillee haithu habastanee” (I come out of the state of Ihraam from the place You prevent me from continuing). So if you do that and are then prevented or become ill – then you may come out of Ihraam. Then repeat the Talbiyyah: “labbayk Allahumma labbayk, labbayka laa shareeka laka labbayk, innal-hamda wan-ni’mata laka wal-mulk, laa shareeka lak” (“In response to your call O Allaah I perform ‘Umrah, here I am O Allaah. In response to Your call. You have no partner. In response to Your call. All Praise and Blessings, and the Ownership of all that You created is Yours (alone). You have no partner”)

Upon arriving at the sacred mosque in Makkah (Al-Masjid Al-Haraam), you should enter with your right foot and say: “Bismillaah, Allaahumma Salli ‘Alaa Muhammad, Allaahumma Ighfirli waftahli Abwaaba Rahmatik. (In the name of Allaah! O Allaah! Exalt the mention of your Messenger. O Allaah! Forgive my sins, and open the gates of Your mercy for me).” You should enter in a manner expressing humility and gratitude to the blessings He, Almighty, conferred upon you.

3.     Upon arriving at the K’abah, stop reciting the Talbiyyah, then approach the Black Stone, touch it with your right hand and kiss it. If this isn’t possible, you should face the Black Stone and point to it. Don’t push and shove, causing harm and being harmed by other people. When touching the Stone, the following is said: “Bismil-laah, Allaahu Akbar” (In the name of Allaah, Allaah is the Greatest) or “Allaahu Akbar” (Allaah is the Greatest).

A pilgrim must walk, keeping the Ka’bah on his left. When you reach the Yamaani corner touch it with your right hand, if possible, but do not kiss it, and say: “Bismil-laahi wa Allaahu Akbar”. If this is difficult for you, then go on performing tawaaf without touching it, pointing at it or even saying “Allaahu Akbar” because this was not narrated from the Prophet on the other hand whenever you reach or are parallel to the black stone, touch it with your right hand, kiss it and say, “Bismillaah Allaahu Akbar”, if it is not possible then it is enough to point at it and say, “Bismillaah, Allaahu Akbar”.

During this Tawaaf it is preferred for a man to do two things:

a)     Al-Idhtibaa’ from the beginning of Tawaaf until the end, which is placing the middle of one’s Redaa’ under the right arm and the ends of it over the left shoulder. When you are finished performing Tawaaf, you may return your Reda’ to its original state because the time for A-Idhtibaa’ is only during Tawaaf.

b)    Ar-Raml during the first three circuits only. Ar-Raml means speeding up one’s pace with small steps.

Make supplication from your heart, for that which will benefit you. Recite whatever you wish, supplicate to Allaah by asking for good, recite the Quran, anything you wish. There are no specific statements or supplications to be recited during the Tawaaf that are authentically established in the Sunnah. However it is recommended to say between the two corners during each circumbulance as it is reported from the Messenger of Allaah : “…Our Lord, grant us good in this life and good in the hereafter and save us from the punishment of the Hellfire.” [Quran: 2:201]

4.     When you complete seven circuits of Tawaaf, approach Maqaam Ibraaheem (Ibraaheem’s station) and recite this verse (which means): “And take you (people) the Maqaam (place) of Ibraheem as a place of Prayer… ” [Quran: 2:125]

Then pray two short Rak’ahs, as close as conveniently possible, behind Maqaam Ibraheem. If it is not possible then you can pray them anywhere in the sacred mosque. It is preferred to recite during the first Rak’ah the chapter “Al-Kafiroon” [109] and during the second one the chapter of “Al-lkhlaas” [112].

Upon completing the two Rak’ahs, return to the Black Stone and touch it, if convenient

5.     The next stage is to go to Safaa. Upon approaching the foot of Safaa, the following verse is recited (which means): “Verily, As-Safaa and Al-Marwah are from the symbols of Allaah. So it is not a sin on him who performs Hajj or ‘Umrah of the house (ka ‘bah) to perform the going (tawaaf) between them. And whoever does good voluntarily, then verily, Allaah is the All-Recognizer, All-Knower.” [Quran; 2:158]

6.     Then climb unto mount Safaa until the Ka’bah is visible, if possible. Facing the Ka’bah the following is to be said 3 times, and between each time one is to make ones own supplication:

has no partner. To Him belongs the dominion, to Him belongs all praise, and He has power over everything. He fulfilled His promise, gave victory to His servant, and defeated the confederates alone.)

There are no particular supplications to be recited between Safaa and Marwah. Seven circuits are to be completed ending the last one on Marwah.

Then one is to have his hair cut although shaving it is better. Women should shorten their hair by a finger-tips length from the end. The rights of ‘Umrah have now been completed.