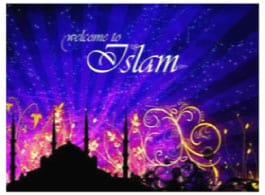 Whatever you think or believe, there is No harm in searching for the truth and studying Islam.

Islam is an Arabic Word which means peace, purity, acceptance, and commitment. The religion of Islam is the complete acceptance of the teachings and guidance of God (Allah being his proper name). I.e. surrender to the Will of God.

A Muslim is one who accepts freely and willingly the supreme power of God and strives for total reorganisation of his life according to revealed teachings of God. He also works towards the establishment of a just and equitable social order which would totally reflect the guidance of God.

Islam is not a new religion. It is, in essence, the same message and guidance which God revealed to all His Prophets ( May his peace be upon them all ).

The message which was revealed to Muhammad ( May the Peace and blessings of God be upon him ), the Last Prophet, is Islam in it’s comprehensive, complete and final form.

The 5 Pillars of Islam:

Every action which is done with the awareness that it fulfills the will of God is considered an act of worship in Islam. Nevertheless, the specific acts of Worship, termed the pillars of Islam, provide the framework of spiritual life.

They are the Following:

“I bear witness that there is none worthy of Worship except God, and that Muhammad is His servant and messenger”

The Prophethood of Muhammad ( SAW ) obliges the Muslims to follow his exemplary life in every way.

Prayers are prescribed five times a day as a duty towards God. They strengthen and enliven the belief in God and inspire man to a higher morality. They purify the heart and control temptation towards wrong doing and evil. It should be stressed that while Allah does not need our prayers we cannot survive without His blessings and guidance.

“O you who believe! Seek help with patient perseverance and prayer, for Allah is with those who patiently persevere”. (Holy Qur’an)

Fasting is observed once each year during the month of Ramadan. This means abstention from food, drink and sexual intercourse from dawn to sunset, and also from all evil intentions and desires. It teaches Love, sincerity and devotion. It develops a sound social conscience, patience, unselfishness, and willpower. When we fast by choice, God remembers our sufferings. He appreciates it all 🙂

Zakat payment annually of 2.5% of ones net savings as a purifying sum to be spent on the poor and needy. Zakat implies that everything man possesses belongs to God and therefore anyone in need has a share in it.

Once in a lifetime provided one has the means to do so. Hajj implies Man’s temporary suspension of all worldly activities and his realisation of himself as a naked soul in front of God alone.

Islam enjoins faith in the oneness and sovereignty of God, which makes man aware of the meaningfulness of the Universe and of his place in it. This belief frees him from all fears and superstitions by making him conscious of the presence of Almighty God and of man’s obligations towards Him. Belief in One God requires that we look upon all humanity as one family irrespective of colour, class, race, or territory, under the Omnipotence of God the Creator and Nourisher of all.
Islam rejects the idea of a chosen people, making faith in God and good action the only way to HEAVEN. Thus a direct relationship is established with God. Open to all alike, without any intercessor.

Man is the highest creation of God and chooses his own way. Created with the highest potentialities, man is left relatively free in his will, action and choice. God has shown him the right path and the life of Prophet Muhammad ( SAW ) provides a perfect  example. Man’s success and salvation lies in following them. Islam teaches the sanctity of the human personality and confers equal rights upon all without any distinction of race or sex.

The Law of Allah, enunciated in the Qur’an and exemplified in the life of the Prophet, is supreme in all cases. It applies equally to the highest and the lowest, the prince and the peasant, the ruler and the ruled.

The world according to Islam, is a place of trial and man is being judged in it. Man is accountable to Allah for all that he does herein. Life on earthy will, one day, come to an end; and after that a new world will be resurrected. It will  be in this Life after Death that man will be rewarded or punished for his deeds and misdeeds. God will judge man on the day of Judgement and send him either to Heaven, a stage of existence which leads to further blessings, or to Hell, a stage of suffering and punishment.

The Qu’ran is the last revealed Word of God and as such affirms and completes the total process of revelation which has come from the Divine, for the Guidance of the Human race. The Qu’ran is the basic source of Islamic teachings and laws and deals with the bases of creeds, morality, history of humanity, worship, knowledge, wisdom, God-man relationship ( He is our Master, Creator, and Lord, we are his servants ), and human relationships in all aspects.
Comprehensive teachings on which sound systems of social justice, economics, politics, legislation, jurisprudence, law and international relations can be built, are important contents of the Holy Qu’ran.

Muhammad ( SAW ) himself was an unlettered man who could not read or write. The Holy Qu’ran was revealed to him over a period of 23 years and committed to memory and writing by his followers under his supervision during his lifetime. The original and complete text of the Qu’ran is available to everybody in Arabic, the language in which it was revealed. Translations of the meaning into many languages are widely used.
Hadith, the teachings, sayings, and actions of the Holy Prophet Muhammad ( SAW ), meticulously reported and collected by his devoted companions, explain and elaborate the Qu’ranic verses.

Islam does not teach or accept mere Ritualism. It emphasizes intention and action. To worship God is to know Him and Love Him, to act upon His laws in every aspect of life, to enjoin goodness and forbid evil and oppression, to practice charity and justice and to serve Him by serving mankind. Islam seeks to implant in man’s heart the strongest conviction that his every thought and action are with God, Who sees him at all times and in all places.

The Qur’an presents this concept in the following sublime manner:

“It is not righteousness that you turn your faces to the East or the West, but righteous is he who believes in God and the Last Day and the Angels and the Book and the Prophets; and gives his wealth for the love of Him to kinsfolk and to orphans and the needy and the wayfarer and to those who ask, and to set slaves free; and observes proper worship and pays the Zakat. And those who keep their treaty when they make one, and are patient in tribulation and adversity and time of stress. Such are those who are sincere. Such are the God fearing”. ( Holy Qur’an )

Islam provides definite guidelines for all people to follow in all walks of life. The guidance it gives is comprehensive and includes the social, economic, political, moral and spiritual aspects of life. The Qur’an reminds man of the purpose of life on earth, and his duties and obligations towards himself, his kith and kin, his community, his fellow human beings and his Creator. Man is given fundamental guidelines about a purposeful life and then he is left with the challenge of human existence before him so that he might put these high ideals into practice.
In Islam man is a wholesome, integrated unit and not a collection of fragmented, competitive parts.
The sacred and secular are not separate parts of man; they are united in the nature of human being.

Muhammad ( SAW ) was born in the year 570 A.C. in Makkah in Arabia. He came of a noble Arab family. As soon as he started preaching Islam, he and his followers were persecuted and had to face severe hardships. He was therefore commanded
to migrate to Medina, another city in Arabia.
During a short span of 23 years he was put to rest in the city of Medina. He left no wealth or property. He had lead a perfect life and set an example for all human beings. His Biography illustrates in real life, the meaning and implications of the Qu’ranic teachings.

Islam is a simple, rational and practical religion. The unity of God, the Prophethood of Muhammad ( SAW ) and the concept of life after death are the basic articles of it’s faith. There is no hierarchy of priests, no complicated rites, and rituals. Everybody may approach the Qu’ran directly and translate it’s dictates into practice.
Islam stands for the middle path and the goal of producing a moral man in the service of a Just Society.

“Our Lord ! give us good in this world and good in the hereafter”. ( Holy Qur’an )

Islam is a guide to towards a better and complete life and Glorifying in all it’s phases, God the Almighty Creator.

Marriage is a very important and sacred bond of relationship between man and woman and a step towards a better purer and happier life. Islam gives both man and woman full right to divorce. Nevertheless divorce is discouraged and is allowed as the last resort.
Islam allows limited polygamy only as a remedy subject to certain conditions.

Jihad (meaning Struggle) consists in exerting oneself to the utmost in order to personally follow the teachings of Islam. A Muslim therefore, expends all the powers of body and soul, his wealth, possessions, and even life in the fight against the evil forces of the world, in order that injustice, oppression, and contumacy are annihilated and God’s just order is established.
Therefore to struggle in the path of Allah with the pen; speech; and his sword is Jihad.

“What has happened to you? Why don’t you fight in the way of God in support of men, women, and children, whom finding helpless, they have repressed; and who pray, “Oh God! Liberate us from this habitation which is ruled by Tyrants”. ( Holy Qu’ran )
Islam has come to liberate man from the worship of man and establish the worship of God.

Islam – The Solution For Modern Problems

The BrotherHood of Man:

A major problem which modern man faces is that of racism. The materially advanced nations can send man to the moon but they cannot stop man from hating and fighting his fellow man. Islam, over the last 1400 years, has shown in practice how racism can be ended. Every year during the Hajj, the Islamic miracle of real brotherhood of all races and nations can be seen in action.

The family which is the basic unit of civilisation is disintegrating in all western countries. Islam’s family system brings into a fine equilibrium the rights of man, wife, children and relatives. Islam nourishes human unselfishness, generosity and love in a well organised family system.

Human beings live according to their view of life. The tragedy of secular societies is that they fail to connect the different aspects of life. The secular and the religious, the scientific and the spiritual seem to be in conflict. Islam puts an end to this conflict and brings harmony to man’s vision of life.

What is the state of the world today? Has man freed himself from all superstitions, imbecility’s and absurd beliefs ? Has he discovered the man from within himself? Has he liberated himself from the yoke of worldly tyrants indulging in the exploitation of man by man ?
If such a millennium has not been achieved despite all developments in science and technology, then Islam has still a great and glorious part to play.