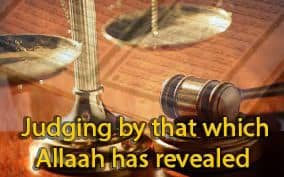 Can one who judges by something other than that which Allaah has revealed be regarded as just, if he does not wrong people?