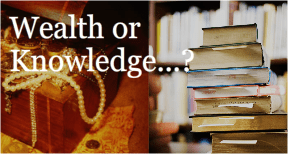 A 15 years old sister compare between knowledge and wealth.

May Allah show us the right path.Ameen.

May Allah reward you sister Faatimah for writing this nice article in that very young age, and thanks to Allah that we have good people like you. Of course knowledge is more important than wealth as you mentioned but also if a Muslim can gain both knowledge and wealth .. or can use his wealth to serve Islam that would be a great option. So of course this article is directed for those who seek wealth without caring about Allah’s satisfaction.