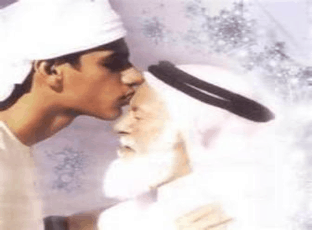 Q: Dad, I have seen something which annoys me. That is, some youth treat their parents badly, and the only excuse for this bad treatment is that the parents do not let them do what they want, or they treat them as if they are still little kids. Moreover, I know that this is not a valid excuse. Can you elaborate on this?

A: May Allah bless you, my son. It is shameful to see a Muslim youth raise his voice when speaking to his parents or treat them badly, forgetting about their rights, which are clearly enunciated in the Noble Qur’an where Allah associates His own rights with theirs:

‘Translation’ {And your Lord has decreed that you worship none but Him. Moreover, that you be dutiful to your parents. If one of them or both of them attain old age in your life, say not to them a word of disrespect, nor shout at them but address them in terms of honor} [Al-Isra:23].

Allah orders the believers to submit themselves in humility to their parents. He says in the Noble Qur’an:

‘Translation’ {And lower unto them the wing of submission and humility through mercy, and say: ‘My Lord! Bestow on them Your Mercy as they did bring me up when I was young} [Al-Isra:24].

Another man came to the Prophet, peace be upon him, and said: “I took an oath to emigrate from the disbelieves’ society and I left my parents crying”. The Prophet said: «Go back and make them happy as you made them cry» (Reported by Sahih AI-Bukhari).

Q: Then if Islam places filial dutifulness in such a high position, then there must be a great reward for it?

The Prophet, peace be upon him, also said: «May he be disgraced; may he be disgraced who finds his parents (one or both) approaching old age and does not enter Paradise by rendering services to them» (Reported by Sahih Muslim).

The third reward is that Allah will answer the invocation of those who are dutiful to their parents. The Prophet, peace be upon him, told his companions about a man named Uwais Al Qarni who was so dutiful to his mother that whenever he asked Allah for something, Allah would fulfill it for him (Reported by Sahih Muslim).

Q: Dad, if this is the reward for observing parents’ rights, then what is the punishment for not observing such rights?

A: Not observing parents’ rights is a great calamity, which leads to grave consequences. The Prophet, peace be upon him, associated disobedience to parents with Shirk (associating partners with Allah in worship; major polytheism).

Q: What is the worst type of disobedience?

A: The worst type of disobedience is the refusal of the child to do the good deeds, which are urged and recommended by the parents.

Q: But some youth may claim that they are undutiful to their parents just because the parents deny them their rights. What do you think of this?

A: My son, there is nothing more serious than committing Shirk, However, Allah orders us in the Noble Qur’an to be dutiful to our parents even if they commit Shirk themselves and urges us to commit it ourselves:

‘Translation’ {But if they (both) strive with you to make you join in worship with Me others that of which you have no knowledge, then obey them not; but behave with them in the world kindly, and follow the path of him who turns to Me in repentance and in obedience. Then to Me will be your return, and I shall tell you what you used to do} [Luqman:15]. It is clear then that you do not obey them in terms of Shirk, but obey those who call you to the Path of Allah. Nevertheless, you are requested to treat them in the best manner.

Q: We can say then that if parents are not observing the duties of Islam properly, we still have to treat them kindly. Is that right?

A: Absolutely. Allah orders us to treat parents respectfully even if they are struggling to turn us away from Islam by calling us to Shirk. All we have to do is to invite them with wisdom to Islam. In addition, when one’s parents are sinful, one has to be patient with them. The respect due to parents is a natural right, and does not depend on how they treat their children. Being tough on their children may be for a good reason. They may have the intention to correct a disagreeable behavior.