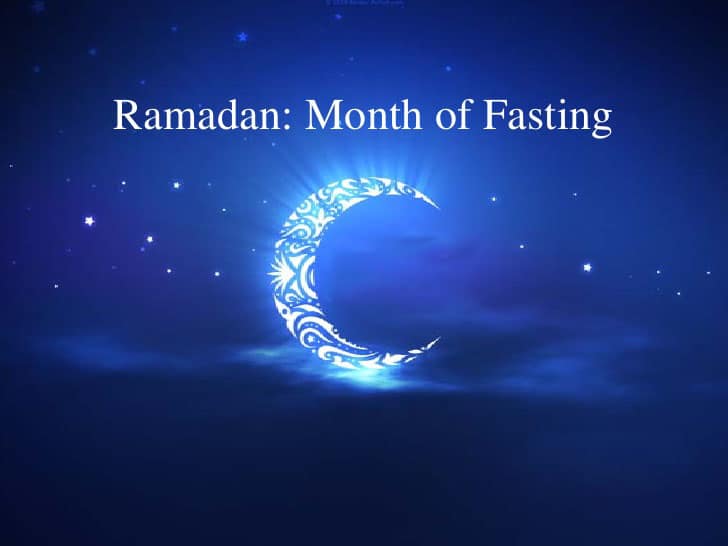 Ramadan, the ninth month of the Islamic lunar calendar, may be 29 or 30 days long. An Islamic month begins with the sighting of the new crescent in the western horizon, immediately after sunset. Muslims look toward the western horizon for the new moon on the 29th day of Shaban, the eighth month. If the new moon is sighted, Ramadan has begun with the sunset but fasting begins with the next dawn. If the new moon is not sighted on this 29th day, Muslims complete 30 days of Shaban and Ramadan begins the following day.

The Significance of Ramadan and Fasting:

Allah says in the Quran:
‘O you who believe! Fasting is prescribed for you, even as it was prescribed for those before you, that you may attain God-consciousness. (2:183)

“In the month of Ramadan, the Quran, a book of guidance with proofs of guidance distinguishing right from wrong, was revealed. Therefore, whoever of you is present in that month let him fast. But who is ill or on a journey shall fast a similar number of days later on. Allah desires your well-being, not your discomfort. He desires you to fast the whole month so that you may magnify Him and render thanks to Him for giving you His guidance.” 2:185

Accordingly, the month of Ramadan is called the month of the Quran; therefore, Muslims have tradition of reciting Quran frequently in this month.

Sawm means a fast that begins with dawn and ends with sunset. Muslims rise before dawn, eat Suhur (pre-dawn meal) and drink liquids for the preparation of Sawm (fasting). Eating and drinking stops at dawn. During the day no eating, drinking or sexual activity is allowed. In addition, a Muslim must adhere to the moral code of Islam very strictly as failure violates the requirements of fasting.

Fasting in the month of Ramadan is one of the deeds of worship required of all Muslims who have attained puberty. Women who are having their menstrual period or who have not fully recovered from childbirth,  postpone the fast until they are completely out of their special conditions. In addition, those who are ill or in travel may choose to postpone their fast.

Muslims fast because Allah has commanded them to do so. However, they may also think about the benefits of fasting which may include developing control over hunger, thirst and sexual urges, training to be a good moral person and, testing sincerity to the Creator. During the fast, Muslims may conduct their business as usual. However, in the Muslim countries working hours are shortened by a couple of hours a day and the hours are changed to make the work comfortable.

The fast is broken immediately after sunset, usually by eating dates and drinking water or juice. However, any lawful food or drink may be used to break the fast. This is followed by the Maghrib salah (after sunset prayer) which is followed by a complete meal. After a brief rest, Muslims go to the mosque to offer the Isha salah (night prayer) and then a special night prayer, called Taraweeh.

This nightly congregational salah (prayer) is performed after the Isha salah. Traditionally, a Hafiz of the Quran, a person who has memorized the whole Quran which is in Arabic, leads the prayer. He recites the Quran in small portions, in proper sequence, every night and completes the recitation of the whole Quran before the end of the month of Ramadan. Every Muslim who attends such prayers regularly gets the opportunity of listening to the whole Quran in a month. If a Hafiz of the Quran is not available, the Muslim who has memorized the most in a group leads the prayer and recites according to his ability. In the absence of a Hafiz, some Muslims hold the Quran in the hand during their salah and read from it. Some Islamic scholars cite the report of the Prophet (p.b.u.h.) that, with the exception of three nights in one Ramadan, he always prayed during the night in his house whether it was Ramadan or not.

The month of Ramadan brings many blessings multiplied manifold for those who do good. During this month people are more generous, more cordial, more friendly and more ready than other times of the year to do good work. The poor and the needy receive food, clothing and money from the well-to-do in the community. Many people go to the mosque in the neighborhood for fast breaking and meals. People in the neighborhood send fruit, food and drinks to the mosque – the atmosphere is that of a friendly pot luck dinner every evening of the month.

Well-known philanthropists of the Muslim community find themselves surrounded by the needy people and Islamic workers for donations. Zakat, a wealth purifying tax, and donations are given at this time of the year since many Muslims wish to take the opportunity of multiplied rewards from Allah.

This is the night of the Qadr. The term Al- Qadr has been frequently translated as “the power”. A better translation may be “the value” or “the decree” because Allah says the value of this night is better than one thousand months, a life time of over eighty-three years. Allah sends His decrees at this night. This is the night when the Quran was revealed. Allah says in the Quran:

The night of value is a gift to mankind from Allah. However, it is not clear which night is Laylat al-Qadr. Some reports by companions of the Prophet (p.b.u.h.) elude it to be the 27th night of the month of Ramadan, but many more sayings point to any of the odd date nights during the last third of the month of Ramadan. According to authentic teachings of the Prophet Muhammad (p.b.u.h.) Muslims are advised to spend the 21st, 23rd, 25th, 27th and 29th nights of Ramadan in worship and doing good works to assure finding Laylat al-Qadr. A portion of the Muslims stay up all night in prayers and good works, however, the Prophet (p.b.u.h.) and his companions used to sleep at least one-third of the night.

In Muslim countries, the 27th of Ramadan is a holiday to enable people to rest during the day after all night of worship. Schools are closed from the 27th of Ramadan through the 2nd of Shawwal (5 to 6 days) to combine Laylat al-Qadr and Eid al-Fitr observances.

The practice of the Prophet Muhammad (p.b.u.h.) was to spend the last ten days and nights of Ramadan in the Masjid (mosque). Following his practice, it is considered a community duty that some people go in I’tekaf (seclusion) in a neighborhood Masjid. The people in I’tekaf spend their time in various forms of Dhikr (remembrance of Allah), such as doing extra salah, recitation and study of the Quran, study of the Hadith, repetition of some phrases of praise and glory to Allah, exhorting each other to be good through obeying Allah and His Messenger (pbuh). Since people in I’tekaf are not permitted to go outside the Masjid except for emergencies, they sleep in the Masjid and use available facilities of the Masjid. The food for the people in I’tekaf is provided either by their own families or people in the community. I’tekaf is terminated, generally, at the declaration of sighting of the moon or the end of the month of Ramadan. For busy people a shorter version of I’tekaf is allowed, such as one night, one day or a few days.

In general, any material help extended to the poor, needy and to those who ask and deserve is called Sadaqah. Sadaqat al-Fitr, which is also called Zakat al-Fitr is the obligatory material help extended to the poor of the society before the Eid prayers, preferably to be given early enough for the poor to prepare for the celebration. In North America, the estimated amount is $5 to $8 to be given on behalf of each member of the donor’s family, including infants.

On the day of Eid, people take a bath or shower in the early morning, eat breakfast, wear their best clothes, apply perfume and proceed to the place of Eid congregation while pronouncing takbeerat, saying, “Allah is the Greatest, there is no deity but Allah and all praise belongs to Allah.” Muslims pronounce takbeerat in their homes, streets and place of congregation while waiting for the leader, Imam. It was the practice of the Prophet Muhammad (p.b.u.h.) to hold Eid prayer congregations in open grounds. Following the practice of the Prophet(s), Muslims are advised to hold Eid prayers in open grounds. In the Muslim countries with warm climate there are designated Eid prayer grounds. However, in North America Muslims rent halls at convention centers or major hotels.

The Imam rises at the appointed time, leads the prayers and delivers a khutbah, sermon. At the end of the sermon, people supplicate, greet, embrace and congratulate each other for the successful completion of Ramadan and ask Allah for the acceptance of their efforts in His obedience.

During the day, people visit each other and children may receive gifts. In some countries, people go for picnics and other gatherings. In addition, special Eid celebrations may be arranged at work or in social settings. Essentially, Eid is a day of thanks to Allah, and also a gathering of family and friends.

Umrah or Minor Hajj in Ramadan:

There is a report from Prophet Muhammad (p.b.u.h.) saying that performing Umrah in the month of Ramadan is equal to performing a major or complete Hajj. Hajj is a pilgrimage to Makkah (commonly misspelled as Mecca). Hajj is the enactment of some of the trials and tribulations of Prophet Abraham (A), his wife Hjir (Hagger) and his oldest son, Isma’il (A) (Ishmael). Hajj includes the sacrifice of Ishmael, represented by the sacrifice of an animal, such as ram, goat, sheep, cow or a camel. Complete Hajj lasts for five days but Umrah is completed in a couple of hours. Umrah is only a small part of the Hajj. An animal sacrifice may be offered at the completion of Umrah. Umrah may be performed anytime during the year but it has special significance in Ramadan. Hajj is performed only during the 8th and 13th days of Dhu al-Hijjah, the twelfth month of the Islamic calendar.