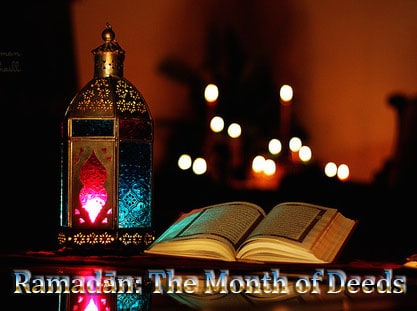 All praise belongs to Allāh the Most High, who created both life and death as a test to see who is foremost in deed.  Through His infinite mercy He blessed mankind with selected times and seasons in which the best deeds are made obligatory and the reward for good deeds is multiplied.

Allāh, the Most Wise, prescribed the third pillar of Islām, fasting, in the second year after the hijrah of the final Messenger (peace be upon him). Fasting is obligatory upon every sane Muslim adult, Allāh the Most High says, “O you who believe! Observing As-Saum (the fasting) is prescribed for you as it was prescribed for those before you, that you may attain taqwa.”[1] Taqwa is defined as “the consciousness of the soul to fulfil what Allāh the Most High has commanded and abstain from what He has prohibited”.[2] Fasting is therefore a means towards achieving a level of self-restraint. The scholars of tafsīr (exegesis) mention various behaviours that are restrained by fasting including eating, drinking, fulfilling one’s desires, being angry and disobeying Allāh the Most High in general. Sufyān al-Thawri said, “The reason for the title muttaqīn (those who have taqwa) is that they leave that which is not left”. Ibn al-Qayyim said “The objective behind fasting is to restrain the soul from desires (for food, drink, and sexual relations), divert it from its normal circumstances, tame the strong desires, prepare it to attain the happiness and benefits (from fasting), and purify it from its untamed state. By experiencing the intensity of hunger and thirst, one is reminded of the condition of the hungry stomachs of needy people.”[3]

The Prophet (peace be upon him) said “On the first night of Ramadān, the devils and rebellious jinn are bound in chains; the gates of Paradise are opened until not a single gate remains closed. The gates of Hell are bound shut until not a single gate remains open. Then a caller calls out, ‘O desirer of good, go forth! O desirer of evil, restrain yourself! Allāh is emancipating people from the Fire every night’.”[4] On the last day of Sha’bān, the Prophet (peace be upon him) gave a sermon and said,

“O people! A great and blessed month has approached you, a month containing a night better than a thousand months. Allāh has made fasting in its days an obligation and prayer in its nights a (recommended) voluntary act. Anyone who seeks nearness to Allāh in this month through any virtuous act will be like one who carried out an obligatory act at another time (outside of Ramadān), and whoever performs an obligatory act in this month will be like one who performed seventy such acts at another time. It is the month of patience, and the reward for patience is Paradise. It is the month of equality, the month in which the wealth of the believer is increased…”[5]

With the reward for obligatory acts multiplied, one must exert oneself to perform them in the best of manners, and with the reward for voluntary acts multiplied one must hasten to perform good deeds. Ramadān is without doubt a golden opportunity for the one who seeks to be absolved from the Hell fire and the one who yearns to dwell in Paradise, wherein they will have all that they desire.

Many Muslims assume that when Ramadān comes they will endeavour to become obedient Muslims and do the maximum possible good deeds for the whole month. If you imagine the reality as a graph, what happens is that you start off with a peak and then the influx of deeds becomes difficult for so many reasons, so you trough or lull for much of this precious month. You then try a bit harder at the end to try to catch laylat-ul-Qadr (the night of decree), but even then you may sleep some nights and even miss some obligatory prayers! This approach to Ramadān is not correct and will repeatedly fail. The Messenger (peace be upon him) and his companions would pray, fast, and be obedient to Allāh all year round. In Ramadān, like other special times in the year, they would maximise their efforts to excel in good deeds.

Ramadān should be used as a platform to change lives, every day should get increasingly better, the case being even more so each and every year. Allāh the Most High loves those deeds that are done with consistency, because they represent a Muslim’s personality, and they are the deeds that will pave the path to Jannah (paradise). Prior to Ramadān, Muslims must perform the obligatory acts, otherwise they may be punished for their negligence after this life. The obligatory acts should be supplemented with voluntary acts that are part of one’s daily routine. Once Ramadān arrives then that is the time to exceed beyond your normal deeds with more voluntary acts and increase them in a gradual manner. Then whoever can perform i’tikāf (confinement of oneself to the mosque) they spend all of their time in good deeds until the end of Ramadān, while those who cannot, exert themselves to spend their days performing good deeds and their nights in prayer. After celebrating ‘Īd al-Fitr, the six fasts of Shawwāl should be performed and good deeds should remain part of our routines until the following Ramadān.

The Messenger of Allāh (peace be upon him) and his Companions (may Allāh be pleased with them) would perform various good deeds in Ramadān. Some of the deeds that have been mentioned in association with fasting and Ramadān will now be mentioned, all of which are highly recommended acts of worship to be performed.

Allāh the Most High combined fasting with eight other deeds when He described the successful believers:

“(The believers whose lives Allāh has purchased are) those who repent to Allāh (from polytheism and hypocrisy, etc.), who worship Him, who praise Him, who fast (or go out in Allāh’s Cause), who bow down (in prayer), who prostrate themselves (in prayer), who enjoin (people) for al-Ma’rūf (i.e. Islamic Monotheism and all what Islām has ordained) and forbid (people) from al-Munkar (i.e. disbelief, polytheism of all kinds and all that Islām has forbidden), and who observe the limits set by Allāh (do all that Allāh has ordained and abstain from all kinds of sins and evil deeds which Allāh has forbidden). And give glad tidings to the believers.[6]

Ramadān is also the month of Qur’ān as Allāh the Most High said “The month of Ramadān in which was revealed the Qur’ān, guidance for mankind and clear proofs for the guidance and the criterion (between right and wrong)”[7]. Abdullāh ibn ‘Amr (Allāh be pleased with him) reported that the Messenger of Allāh said “Fasting and the Qur’ān will intercede for a slave on the day of judgement, the fasts will say, ‘my Lord I prevented him (or her) from food and desires so let me intercede’, and the Qur’ān will say, ‘I prevented him (or her) from sleeping at night so let me intercede’, then they will intercede”[8]. It was said that the salaf would spend the days of Ramadān reading the Qur’ān[9], and the importance of studying the Qur’ān cannot be emphasised enough. A single āyah (verse) recited with contemplation (tadabbur) may be better than reciting many āyāt (verses) of the Qur’ān without contemplation. Scholars differed regarding whether it is better to recite more or recite less with contemplation. Although as isolated deeds they both may be equal, the latter will benefit you for the rest of your life and thus the effects of understanding the Qur’ān will elevate you further in the Hereafter. Abū Jumrah once said to Abdullāh ibn Mas’ūd ‘I am fast in my recitation and perhaps I would recite the Qur’ān once or even twice in a single night’, Abdullāh (Allāh be pleased with him) replied ‘For me to recite one surah is more pleasing to me than if I did that which you do, if you do so then make sure that you recite so that your ears hear what you recite and your heart pays attention.’[10]

Ibn ‘Abbās (Allāh be pleased with him) narrated “Allāh’s Messenger (peace be upon him) was the most generous of people and he was the most generous in the month of Ramadān, when Jibrīl would meet him. Jibrīl used to meet him every night of Ramadān to teach him the Qur’ān.”[11] This hadith emphasises the need to be generous in giving all kinds of charity in Ramadān, in addition to studying the Qur’ān. It is also important to feed others, especially those with less. The Prophet (peace be upon him) said “whoever gives a fasting person (food or drink to break their fast), they will have similar to the reward of the one who fasted, without any decrease for the one who fasted.”[12]

It is upon us all to fear Allāh, and direct our best efforts in and out of the month of Ramadān towards obeying Him. Allāh the Most High commanded us “So keep your duty to Allāh and fear Him as much as you can; listen and obey; and spend in charity that is better for yourselves. And whosoever is saved from his own covetousness, then they are the successful ones.”[13] No one is burdened with more than they can take, however it is through the performance of good deeds and the attainment of taqwa that we will earn the reward prepared for the muttaqīn.