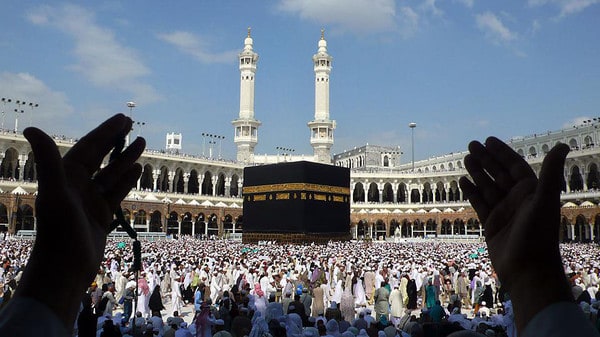 There are many examples, which show the Prophet’s  kindness to his family and relatives. However, it must be emphasized that the Prophet’s  household shared with the people what they learned from him. ‘Aa’ishah, may Allah be pleased with her, was reported to have said to the Prophet : “I have heard what you told your companions, so I banned ‘Umrah.” [Muslim] If one studies the Hajj rituals carefully, one will find that the Prophet’s  household relayed a lot of rulings in this matter because they were the closest to him. Here are the most important facets of the manner of the Prophet  towards them:

1.    Teaching them how to perform the Hajj rituals

2.    Consoling and comforting them

The Prophet  used to console his household in times of hardship. He  would do what they liked provided that it followed Allah’s commands. The most important example is when he  saw ‘Aa’ishah, may Allah be pleased with her, crying because she could not perform ‘Umrah on account of her menstruation. He comforted her and said: “Do not worry; you are a female and Allah has preordained that all females should have this (menstruation); so be in your Hajj and pray to Allah that it will be acceptable.” “O Allah’s Apostle,” she said, “my friends will return with both Hajj and ‘Umrah while I will return with Hajj only.” So the Prophet  ordered Abdur-Rahmaan Ibn Abu Bakr, may Allah be pleased with him, to take her to Tan’eem (an area outside the sanctity of Makkah). There she recited Talbiyah with the intention to perform Umrah. [Al-Bukhari]

3.    Guarding them against sins

The Prophet  was dedicated to purify his household from their sins and from any evil deeds they might have committed. He denounced and prevented any ill deed they might have contemplated, as when he prevented Al-Fadhl Ibn ‘Abbaas, may Allah be pleased with him, from looking at the woman from the people of Khath’ami who came to ask the Prophet  a question. [Muslim]

4.    Encouraging them to do good deeds

The Prophet  used to urge his household to do good deeds, as these would be in their provision for the Hereafter. For example, one day he  passed by some of his cousins who were drawing water from the well of ZamZam for the people to drink. “Keep drawing water, Banu Abdul Muttalib! Had I not been afraid that other people would compete with you, I would have taken part in drawing water with you.” [Al-Bukhari]

Hearts may decay and minds may be distracted by temptation. When large numbers of men and women gather in the same place, opportunity becomes propitious for temptation, particularly that of women. The Prophet  was concerned and very careful that his household might be prone to this type of incitement during the Hajj. For example, his wives, may Allah be pleased with them, veiled their faces when they were in Ihraam whenever there were men close by, but lifted their veils when the men had passed them by. [Al-Bukhari]

The Prophet  instructed his wives not to mix with men during Tawaaf, although both men and women were together during its performance as understood from the hadeeth narrated by Umm Salamah, may Allah be pleased with her. She reported that the Prophet  told her: “Perform Tawaaf behind the people on your camel back.” [Al-Bukhari] Another version says that the Prophet told her: “When the Dawn prayer has been announced, perform Tawaaf on your camel back while the pilgrims are offering their prayers,” and so she did.

6.    Being charitable to them

It is no exaggeration to say that the gentle attitude of the Prophet  towards his household is indeed a form of charity. All his actions reveal how generous and magnanimous he was to them. Here are some examples:

The Prophet  was keen on taking his entire household to perform the Hajj rituals with him, persuading those who were reluctant to go with him as in the story of Dhiba’ah. “I am in pain,” she said, when the Prophet  told her he wanted her to perform Hajj. “Perform Hajj provisionally and say: ‘O Lord, I will end my Ihraam where You detain me.’” [As-Seerah Al-Nabawiyyah]

7.    Asking their help and employing them

The Prophet  asked members of his household for help, and employed some of them. Here are some examples:

The Prophet  asked his wife ‘Aa’ishah, may Allah be pleased with her, to do garlands for his badanas (sacrificial camels), using some wool she had in Madeenah before he  assumed Ihraam. [Ibn Maajah]

Ibn ‘Abbaas, may Allah be pleased with him, narrated another example. He said, “Sitting on the back of his she-camel at Aqabah, the Prophet  said to me, “pick up seven pebbles for me,” and I did so.” [Ibn Maajah]

The Prophet  asked Ali, may Allah be pleased with him, to slaughter the rest of his badanas for him, and ordered him to give away the meat, hides and coverings to the poor as alms. [Al-Bukhari]