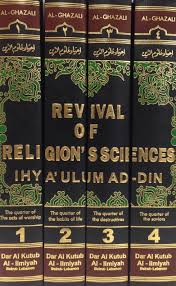 Q: Do you advise us to read the book Ihya’ ‘Uloom al-Deen by Shaykh Abu Haamid al-Ghazzaali?

Shaykh al-Islam [Ibn Taymiyah] was asked about this book, and he replied as follows:
“With regard to the books Qoot al-Quloob and the similar book al-Ihya’, which speak of the actions of the heart such as patience, gratitude, love, trust in Allaah, Tawheed (belief in Allah alone) and so on, Abu Taalib [the author of Qoot al-Quloob] has more knowledge of hadeeth, reports and the views of scholars who spoke of spiritual matters among the Sufis and others than Abu Haamid al-Ghazzaali, and his words are more correct, more precise and further removed from bid’ah (innovation). But nevertheless Qoot al-Quloob includes da’eef (weak) and mawdoo’ (fabricated) ahaadeeth, and many unacceptable things. With regard to what is said in al-Ihya’ about things that may doom a person to Hell, such as pride, self-admiration, showing off, malicious envy, etc., most of it is taken from al-Haarith al-Muhaasibi in al-Ri’aayah; some of it is acceptable and some of it is to be rejected, and some of it is controversial. There is a great deal of good in al-Ihya’ but it also contains some blameworthy material and some corrupt material such as the words of the philosophers on Tawheed, Prophethood and the Resurrection. When he deals with Sufi topics it is like one who has taken an enemy of the Muslims and dressed him in Muslim garb. The leaders of Islam denounced Abu Haamid for this feature of his books, and they said that he was made sick by al-Shifa’, meaning Shifa’ Ibn Seena, which is about philosophy. [Shifa’ literally means “healing” in Arabic].

It contains many of the errors and myths of the Sufis.

Nevertheless it also contains some of the words of Sufi shaykhs who correctly understand the actions of the heart in accordance with the Qur’aan and Sunnah, and it speaks of acts of worship and etiquette in accordance with the Qur’aan and Sunnah; such material outweighs the material that is to be rejected. This is why people differed and disputed concerning it.” (Majmoo’ al-Fataawa, vol 10, p. 551).

Hence our advice is that people should not read it, especially since there other books in the same field which mean that there is no need for it, such as (Haadi al-Arwaah), (al-Fawaa’id), (Zaad al-Ma’aad) by Ibn al-Qayyim; (al-‘Uboodiyyah and al-Eemaan) by Shaykh al-Islam Ibn Taymiyah; (Lataa’if al-Ma’aarif), and (Risaalat al-Khushoo’ fi’l-Salaah), by Ibn Rajab. There is also a summary of Ihya’ ‘Uloom al-Deen from which one may benefit, such as (Mukhtasar Manhaaj al-Qaasideen) by Ibn Qudaamah. In the case of a student (taalib al-‘ilm) who has a strong foundation of knowledge, there is nothing wrong with him reading it if he is able to distinguish between what is saheeh (sound) and what is da’eef (weak), what is true and what is false.

For more information on al-Ghazzaali and his book, please see Question no. 13473.