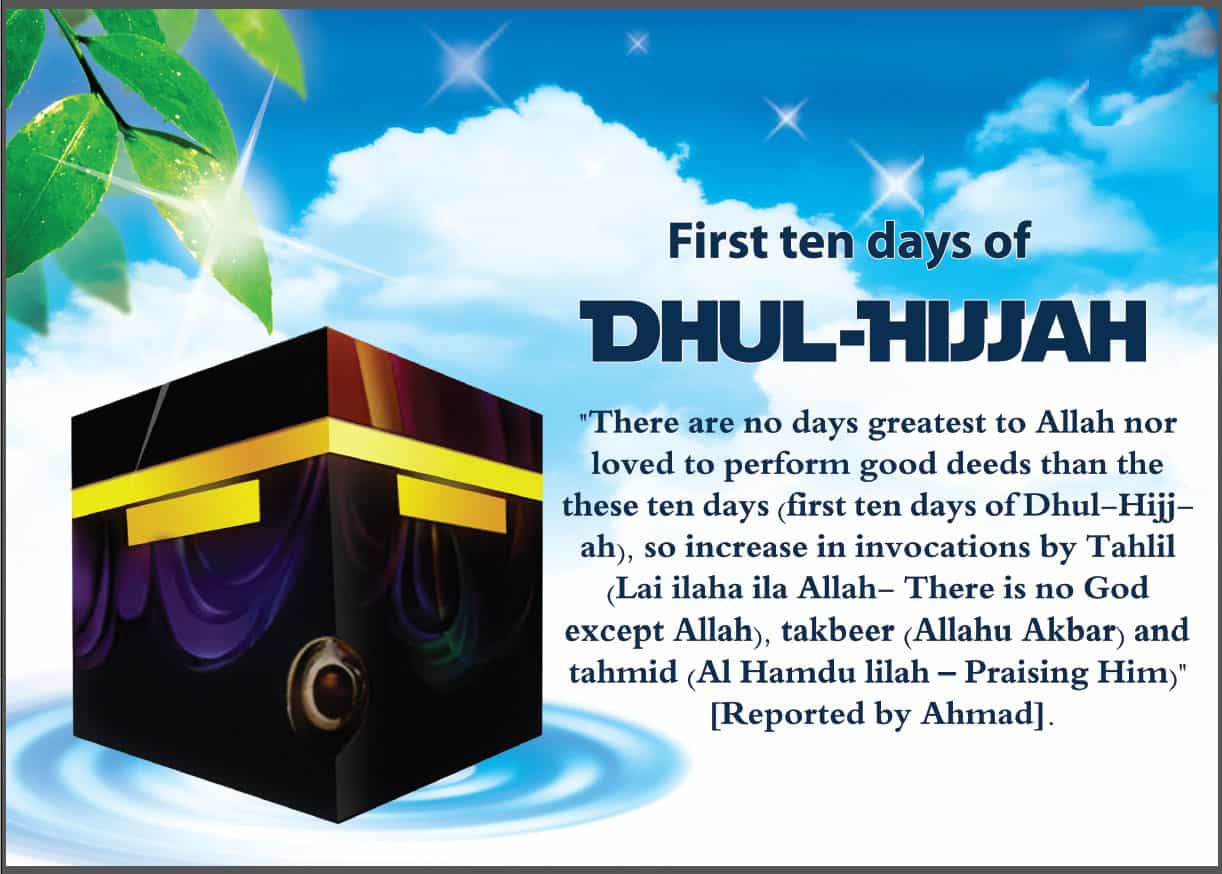 Peace be upon our prophet Muhammad, the leader of the successful group, and peace be upon his family, companions and upon all those who followed his clear straightway……..

The first ten days of Zul-Hijjah are more precious than gold, so you should make good use of them……….

The prophet (peace be upon him) said “No good deeds done on other days are superior to those done on these (first ten days of Zul-Hijjah). Then some companions of the prophet said, “Not even Jihad? “He replied, “Not even Jihad, except that of a man who does it by putting himself and his property in danger (for Allah’s sake) and doesn’t return with any of those things.” [Al-Bukhari]

Some virtues of the ten days of Zul-Hijjah:

Firstly: The Almighty Allah swore with them in the Glorious Quran, as He says:

Ibn Kathir (one of the Quran interpreters) said “the ten nights here are the first ten days of Zul-Hijjah.”

Translation: {And mention the name of Allah on known days} [Al-Hajj 22:23]

Ibn Abbas (one of the prophet’s companions) said: “these appointed days are the first ten days of Zul-Hijjah.” 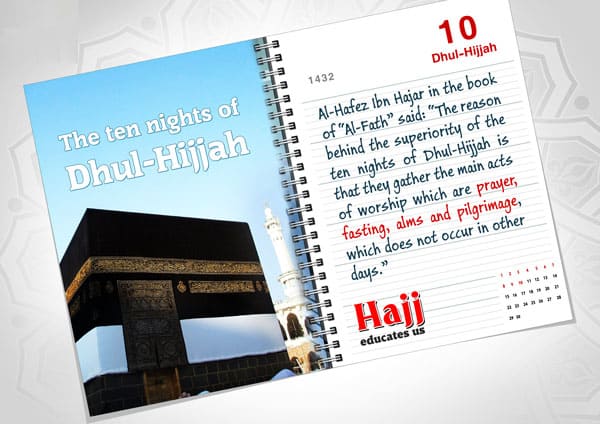 Fourthly: Ibn Hajar (one of Muslim scholars) said: “the reason for the excellence of the first ten days of Zul-Hijjah is that the Muslim can perform in them the main kinds of worship which are prayer, fasting, charity and Hajj, while he can’t gather all these kinds of worship in the other days of the year.”

Sixthly: In the first ten days of Zul-Hijjah, our righteous ancestors were making every effort they can afford in different kinds of worship.

The best righteous deeds that we are requested to do in these ten blessed days:

1- Performing Hajj and Umra as Allah’s Apostle said, «(The performance of) ‘Umra is an expiation for the sins committed (between it and the previous one). And the reward of Hajj Mabrur (the one accepted by Allah) is nothing except Paradise.» (Agreed upon)

2- Fasting all or some of these ten days (except the day of Eid (the tenth day) and the three days that follow it.

An-Nawawy (one of Muslim scholars) said “fasting these days is very preferable.”

When the prophet was asked about fasting the day of Arafat, he said: «I seek from Allah that fasting on the day of ‘Arafat may atone for the sins of the preceding and the coming year.» (Muslim)

Omar son of Al-Khattab (may Allah be blessed with him), the commander of the faithful was loudly saying “Allah Akbar ( Allah is the greatest)” in his dome in Mina, when the people in the mosque heard him they were saying also “Allah Akbar” and so did the people in the market till Mina was shaking of Takbeer (saying Allah Akbar).

Muslims should revive this Sunnah (saying Allah Akbar loudly) which most of them forgot in these days.

5- Al-Odheya (an offering for sacrifice of an animal (cow –camel-sheep) :

Firstly: warning against leaving it:

The prophet (peace be upon him) warned against leaving it when he said « he who has the financial ability to offer sacrifice (of an animal) but he doesn’t do, it is not allowed for him to come near our place of Eid prayer.» [Declared authentic by Al-Albani]

Secondly: Preparing ourselves for it:

The prophet (peace be upon him) said «He who has a sacrificial animal with him whom (he intends) to offer as sacrifice, and he enters the month of Zul-Hijjah, he should not get his hair cut or nails trimmed until he has sacrificed the animal.» (Muslim)

Thirdly: the days of Odheya (sacrifice):

Muslim can offer his sacrifice in the day of Eid (the tenth day of Zul-Hijjah month) and the three days followed it, as the prophet (peace be upon him) said «slaughtering (of animals as a sacrifice) is permissible in all the days of Tashreeq (11th, 12th, and 13th of Zul-Hijjah)» (Declared authentic by Al-Albani)

Notice: these days (the days of Tashreeq) were named with this name because the people of Mecca were spreading the meats of Hadi (sheep –cow –camel) on rocks to the direction of the sun shine till it becomes dried meat that can be preserved till they need it.

Fourthly: The best times for Odheya:

The best time for it is directly after Eid prayer, but it is not permissible before the prayer, as the prophet (peace be upon him) said «The first (act) with which we started our day (the day of ‘Id-ul Adha) was that we offered prayer. We then returned and sacrificed the animals and he who did that in fact adhered to our Sunnah (practice). And he who slaughtered the (animal on that day before the ‘Id prayer), for him (the slaughtering of animal was directed to the acquiring of) meat for his family, and there is nothing of the sort of sacrifice.» [Agreed upon]

The best place for slaughtering the sacrificial animal is in the place of Eid prayer if it is possible.

Ibn ‘Umar said, “Allah’s Apostle used to slaughter (camels and sheep, etc.,) as sacrifices at the Musalla (the place of Eid prayer) ” (Al-Bukhari).

Sixthly: Eating from the meat of the slaughtered animal:

The prophet (peace be upon him) used not to eat on the day of Eid Al-Adha till he prayed and then came to eat of his slaughtered animal (Narrated by Imam Ahmad and declared Hasan (good) by Al-‘Rna’oot).

Dear brothers and sisters: you should be keen on taking this great chance (the first ten days of Zul-Hijjah), before it becomes too late, to win Allah’s content.

Translation: {And hasten to forgiveness from your Lord and a garden as wide as the heavens and earth, prepared for the righteous} [Al-‘Imran:133].

And we ask Almighty Allah to support us to do what He likes and accept, we ask Him also to accept your righteous deeds and give you great reward.

Peace be upon you all