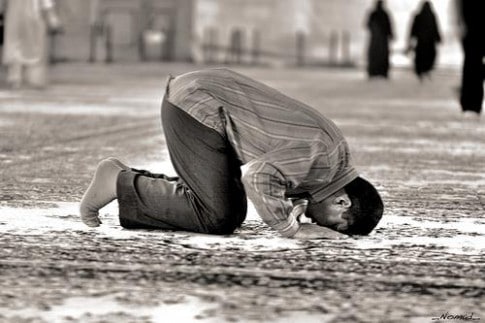 The ideal Muslim character is distinct and balanced. The Muslim is the embodiment of the teachings of the Quran and the ‘Sunnah’ (sayings, actions and the approvals of the Prophet Muhammad ). He follows the teachings of the Book of Allah (i.e. Quran) and the example of the Prophet Muhammad  in all affairs, relations, and situations – starting with his relationship with his Lord, his own self, his family and the people around him.

In what follows is a brief overview of some qualities of the ideal Muslim personality.

His attitude towards Allah

One of the most distinguishing features of the (ideal) Muslim is his deep faith in Allah, The Exalted, and his conviction that whatever happens in the universe and whatever befalls him, only happens through the will and the decree of Allah. The Muslim is closely connected to Allah, constantly remembers Him, puts his trust in Him and is obedient towards Him.

His faith is pure and clear, uncontaminated by any strain of ignorance, superstition or illusion. His belief and worship are based on the Quran and the authentic ‘Sunnah’.

The Muslim is alert and open-minded to the magnificence of Allah. He knows that it is Allah who is in control of the affairs of the universe and of mankind, and He (Allah) Knows all and Witnesses every secret.

A Muslim feels in the depths of his soul that he is in constant need of the help and support of Allah, no matter how much he may think he can do for himself. He has no choice in his life but to submit to the will of Allah, worship Him, strive towards the Right Path and do good deeds.

This will guide him to be righteous and upright in all his deeds, both in public and in private.

His attitude towards his body, mind and soul

The Muslim pays due attention to his body’s physical, intellectual and spiritual needs.

He takes good care of his body, promoting its good health and strength. He is active, doesn’t eat in excess; but he eats enough to maintain his health and energy. He understands that a strong believer is more loved by Allah than a weak believer. Allah, The Exalted, Says (what means): “…Eat and drink; but waste not by excess, for Allah loves not the wasters.” [Quran 7: 31]

The Muslim keeps away from drugs and stimulants. He also does not forget to exercise regularly to maintain his physical fitness.

The Muslim also keeps his body and clothes very clean. He bathes frequently. The Prophet  placed a great emphasis on cleanliness and bathing. Cleanliness makes the Muslim more likeable to people. He also takes care of his mouth and teeth.

It is no surprise that the Muslim is concerned with his clothing and appearance. The Muslim does all of this in accordance with the Islamic ideal of moderation, avoiding the extremes of exaggeration and negligence.

Allah Says (what means): “Say: Who has forbidden the adornment of Allah which He has brought forth for His bondmen, and the good things of His providing? Say: Such, on the Day of Resurrection, will be only for those who believed during the life of the world. Thus do We detail Our revelations for people who have knowledge.” [Quran 7: 32]

As for his intellectual care, the Muslim takes care of his mind by perusing beneficial knowledge. He is responsible to seek knowledge whether it is religious or secular, so he may understand the nature and the essence of things. Allah Says (what means): “…and say: My Lord! Increase me in knowledge.” [Quran 20: 114]

The Muslim does not forget that man is not only composed of a body and a mind, but that he also possesses a soul and a spirit, and feels a longing for higher things that make him rise above this materialistic life and scale the heights of goodness, virtue and light.

Therefore, the Muslim pays as much attention to his spiritual development as to his physical and intellectual development, in a precisely balanced fashion which does not concentrate on one aspect to the detriment of others.

His attitude towards people

With his parents, the Muslim is an example of sincere filial piety. He treats them with kindness and respect, infinite compassion, utter politeness and deep gratitude. He recognizes their status and knows his duties towards them. Allah Says (what means): “And serve Allah. Ascribe nothing as partner unto Him. (Show) kindness unto parents…” [Quran 4: 36]

With his wife, the Muslim exemplifies good and kind treatment, intelligent handling, deep understanding of the nature and psychology of women, and proper fulfillment of his responsibilities and duties.

With his children, the Muslim is a parent who understands his great responsibility towards them which is, as well as flooding them with love and compassion, to pay attention to anything that may influence their Islamic development and give them proper education, so that they become active and constructive elements in society, and a source of goodness for their parents, community, and society as a whole.

With his relatives, the Muslim maintains the ties of kinship and knows his duties towards them. He understands the high status given to relatives in Islam, which makes him keep in touch with them, no matter what the circumstances.

With his neighbors, the Muslim illustrates good treatment and consideration of others’ feelings and sensitivities. He puts up with mistreatment and turns a blind eye to his neighbor’s faults while taking care not to commit any such errors himself.

In his social relationships with all people, the Muslim is well-mannered, civil and noble, characterized by the attitudes which Islam encourages.

The Muslim does not envy others. He fulfils his promises. He has the attitude of shyness. He is cheerful. He is not pushy. He is patient. He avoids slandering or uttering obscenities. He does not unjustly accuse others. He is shy and modest. He does not interfere in that which does not concern him. He refrains from gossiping, spreading slander and stirring up trouble. He avoids false speech and suspicion. When he is entrusted with a secret, he keeps it. He is modest and never arrogant. He does not make fun of anyone. He respects his elders. He mixes with the best of people.  He strives to reconcile between the Muslims. He calls others to Islam with wisdom and beautiful preaching. He visits the sick and attends funerals. He returns favors and is grateful for them. He guides people to do good. He always likes to make things easy and not difficult.

The Muslim is fair in his judgements. He is not a hypocrite, a sycophant or a show-off. He does not boast about his deeds and achievements. He is straightforward and is never devious or twisted, no matter what the circumstances. He loves noble things and hates foolishness. He is generous and does not remind others of his gifts or favors. He is hospitable and does not complain when a guest comes to him. He prefers others to himself as much as possible. He relieves the burden of the debtor. He is proud and does not think of begging.