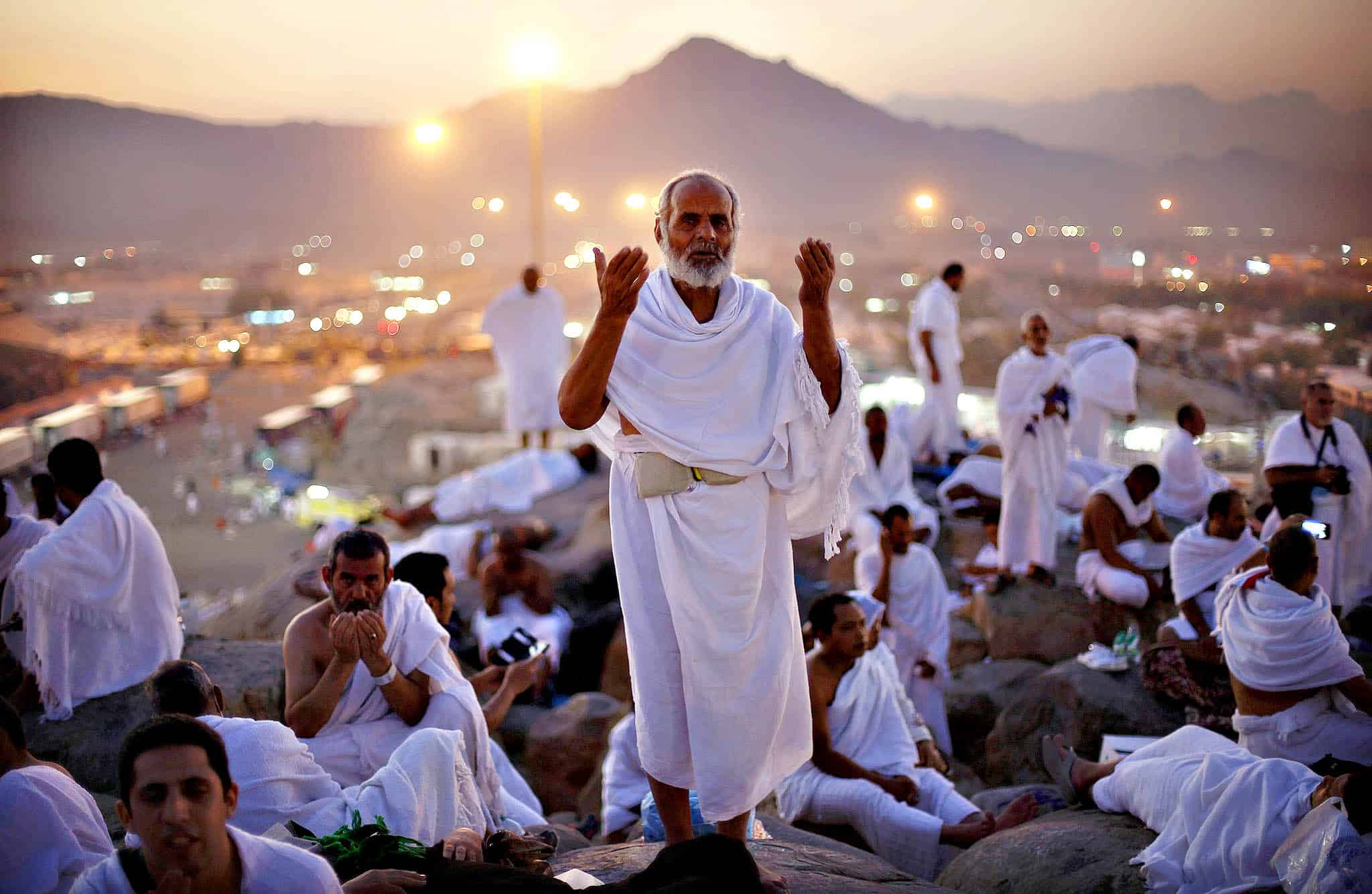 The people of the world are usually aware of two kinds of journey. One journey is that which is made to earn the livelihood. The second one is that which is undertaken for the pleasureand sight-seeing.

In both [of] these journeys, a man is impelled to go abroad by his need and desire. He leaves home for a purpose of his own, he spends money or time for his own requirements, therefore, no question of sacrifice arises in such a journey.

But the position of this particular journey which is called Hajj is quite different from that of other journeys.

This journey is not meant to gain any personal end or any desire of Nafs. It is intended solely for Allah, and for fulfillment of the duty prescribed by Allah.

No person can prepare himself to undertake this journey until and unless he has love of Allah in his heart as well as fear of Him, and feels strongly that the Fard (obligation) ordained by Allah is incumbent on him.

Therefore, whosoever sets out for Hajj parting from his family and relatives for a long period, allowing his business to suffer, spending money and bearing the rigors of the travel, he furnishes by his act of devotion a proof of the fact that there is in his heart fear of God and love for Him as also a sense of duty.

[It also indicates] that he possesses the strength to leave his home, when called upon to do so, for the cause of God, and that he can face hardships and willingly sacrifice his wealth and comfort for the pleasure of God.

Inclination towards virtue and piety

When the pilgrim gets ready for the journey with this holy intention, his disposition assumes a different color.

His heart, which is aflame with exuberance of the love of God and which is pulsating with a longing to visit His House, starts harboring only virtuous thoughts.

He does penance for past sins, seeks forgiveness from people whom he might have wronged, tries to render his due to others where necessary so as not to go to God’s court trammeled with the unfulfilled rights of his fellow beings, shuns vice and develops fondness for virtue.

Then, as he steps out to begin the journey, the more he proceeds toward the House of God, the  more keen he becomes to do good deeds. He is careful to see that nobody is harmed by him, while he tries to render whatever service or help he can to others.

His own nature desists from abuse, indecency, dishonesty, squabbles and bickerings because he is proceeding on the path of God.

A man may be making [a] journey towards the Divine Haram and yet indulging in bad habits? How can such a shameless thing be possible [for] anybody?

Thus the entire journey of his constitutes a complete ‘Ibadah.

Oppression and vice can find no place in contrast to all other types of journey. This is the one which continuously keeps on purifying man’s Nafs. It is like a great reformatory course to be compulsorily gone through by every Muslim who sets out to perform Hajj.

Blessings and effects of Hajj

From all the details you have heard you can judge that during the period of two to three months, from the time of deciding and preparing for Hajj to the time of returning home, what great effects are produced in the heart and mind of man!

And all this simply for the sake of Allah, with no selfish end.

Then, together with piety and virtuousness, the incessant remembrance of God and the longing and love of Him pervading the mind of the pilgrim, all leave a firm impression on his mind which lasts for years to come.

[On] reaching this sacred land he witnesses at every step the relics of those who sacrificed everything [of] theirs in servitude and obedience to Allah.

They fought against the pagan Arabs, suffered tortures, became migrants, suffered unbearable hardships, but ultimately did raise aloft the Word of God and did not rest content till they subdued every such false power which wanted man to become subservient to other entities than Allah.

A lesson in courage and determination, which a devotee of God can draw from these clear signs and sacred relics, can hardly be available from any other source.

If the attachment developed with his focal point of Deen (religion) through the circumambulation of [the] Ka’bah [and] the rehearsal of a Mujahid’s life [through] the rites (Manasik) of Hajj (such as running about, and repeated departures and halts) are combined with Salah, fasting and Zakah, and they are all seen conjointly, you will realize that these processes constitute a training or some big task which Islam wants Muslims to execute.

For this reason, Hajj has been made compulsory for those who are solvent enough and are capable to undertake the journey [to and from the] Ka’bah so that, as far as possible, Muslims in the largest possible number remain equipped in every period after having fully gone through this training.

[You] will be unable to appreciate fully the benefits of Hajj unless you keep in view the fact that  each and every Muslim does not perform Hajj individually but that only one single period has been fixed for Hajj for the Muslims of the whole world, and, therefore, [hundreds of thousands] of Muslims jointly perform it.

What I have stated before has only brought home to you the effect produced by this ‘Ibadah on every Hajji individually.

Now I shall explain to you[…] how these benefits have been enhanced 100,000-fold by appointing one single period of Hajj for the entire world.

The excellence of Islam lies in this very fact that by one stroke it achieves not only two but 1,000 purposes.

The advantages of offering Salah singly are by no means small but by making it conditional with congregation, enforcing the system of Imamat in Salah and by enlarging the congregations of the Friday and Eidain [the two Eid] prayers, its benefits have been increased to a limitless extent.

The observance of fasting separately by each person is also a very big source of reformation and training but by appointing only one month of Ramadan for all Muslims, these benefits have been increased so much that they cannot be counted.

Zakah too has many advantages even if dispensed individually. But with the establishment of Bait-ul-mal (Public Exchequer of the Islamic State) its usefulness has been increased to such a great extent that you cannot estimate it till such time as an Islamic government is formed and you witness with your eyes how much goodness and plentifulness result from collecting the Zakah of all Muslims at one place and distributing it among the deserving persons in organized form.

Similar is the case of Hajj. If every [person] were to perform Hajj singly, even then it will bring about a big revolution in his life but by formulating the rules for all the Muslims of the world to perform it together at one time; its benefits have been increased to a limitless degree.

Growth of piety and virtuousness

When every intending Hajji [decides] to perform Hajj and immediately with this intent the virtues of fear of God, piety, penance, Istighfar (seeking forgiveness from God) and good morals begin to cast their influence on him; [when] he starts [saying] farewell [to] his relatives, friends, professional and other associates; and [when he] settles all his affairs as if he is no longer the same man as before (his mind is now pure and clean because of the newly-kindled spark of love of God), you can imagine the effect of the changed condition of the Hajji on so many people around [him].

And if every year in each of the different parts of the world 100,000 Hajjis at an average get prepared for Hajj in this manner, their influence will improve the moral state of a vast number of people.

Then the hearts of [a] large number of people [will be] warmed at places through which the Hajjis’ caravans pass, by seeing them, meeting them and by hearing from them the [sound] of Labbayk, Labbayk.

There will be many whose attention will be diverted towards Allah and Allah’s House, and the eagerness for Hajj will create a stir in their slumbering souls.

And when these people, filled with the thrill of Hajj, return from the Center of their Deen to their cities and towns spread over all parts of the world and [are] met by numerous persons, then this [interchange] and the accounts related by the former of their Hajj experience enliven religious sentiments among countless circles.