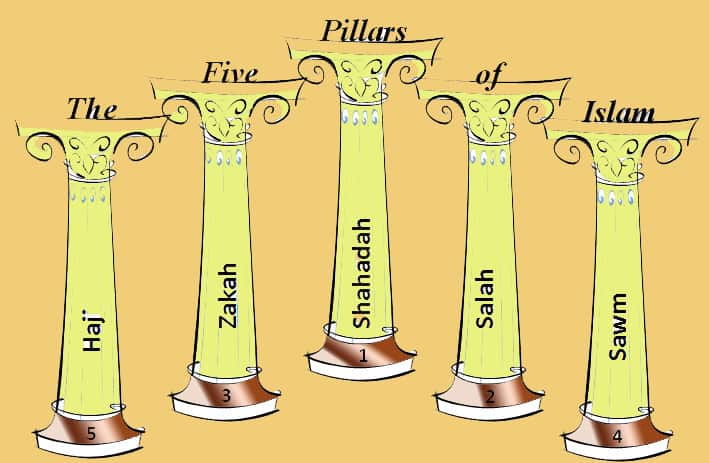 The Pillars of Islam are the cornerstones on which Islam is built. There are five pillars of Islam. They are mentioned in the Hadeeth of ibn Omar (radiyallaahu anhuma), that the Prophet (sallallaahu alaihi wa-sallam) said, what translated means, “Islam is built around five (pillars):

1. The testimony that there is no god except Allah and that Muhammad (sallallaahu alaihi wa-sallam) is His slave and Messenger,
2. To establish prayer,
3. To give Zakaat (obligatory charity),
4. To fast in Ramadhan, and,
5. To perform Hajj (pilgrimage).”

1. The Shahadah (the testimony) that there is none worthy of worship except Allah and that Muhammad (sallallaahu alaihi wa-sallam) is His slave and Messenger, requires solid belief, in the heart, in it. This belief must also be confirmed by the tongue. It is called Shahadah (testimony) to show that when a believer believes in it, his belief is as solid as if he is an eyewitness. This Shahadah is one cornerstone, although it contains many aspects that must be taken as belief. This testimony (comprised of two testimonies as is apparent), is considered one cornerstone, either because it contains testifying that Muhammad (sallallaahu alaihi wa-sallam) is only a conveyer of the Message from Allah and His slave and Messenger, thus completing the testimony that Allah is One or because these two testimonies together are the reason behind the acceptance of deeds by Allah. Deeds are neither valid nor accepted unless they are done with sincerity for the sake of Allah alone, and this is called “Ikhlas,” and through following the way of the Messenger of Allah (sallallaahu alaihi wa-sallam).

Realizing the essence of this testimony, that there is no god except Allah, is a result of Ikhlas (sincerity) to Allah. Realizing the essence of testifying that Muhammad (sallallaahu alaihi wa-sallam) is His slave and Messenger, comes as a result of following the Messenger of Allah. This magnificent testimony leads to many sweet results. It frees the hearts and souls from being enslaved to the creation and from following other than the Messenger.

3. Paying Zakat is worshipping Allah by paying the amount of charity obligated on the ones who have enough money or possessions that require paying Zakat. Paying the required Zakat leads to cleansing the heart from the evil of misery. It also fulfills the needs of Islam and Muslims.

4. Fasting Ramadhan contains worshipping Allah by fasting during the days of this month, by not eating or drinking from dawn to sunset. Fasting trains the souls to abandon what is preferred and desired, seeking the pleasure of Allah.

5. Performing Hajj (pilgrimage to Makkah) is worshipping Allah by visiting the Holy House to perform the rituals of Hajj. Hajj trains the souls to spend time and physical effort, seeking to obey Allah. This is why Hajj is considered a type of Jihad (struggle).

These fruits of performing the pillars of Islam, along with many others we did not mention, make the Muslim nation pure and clean. They lead the nation to preserving the religion of Truth and dealing with the creation in the best manners of justice and truthfulness. All other acts of the religion depend on how well these pillars are preserved. The Ummah (Muslim nation) can reach success as long as its members preserve the religion. This Ummah will not reach the desired success as long as the religion is not fully respected and preserved.

Let him also read the history of previous nations, which gives valuable lessons for whoever is in possession of a mind that comprehends and is rightly guided. This history is a light for those whose hearts are not blocked from the truth. All our dependence is on Allah.

Allah said, what translated means, “Righteousness is not that you (only) turn your faces towards the East and (or) the West (in prayers); but righteousness is (the quality) of the one who believes in Allah, the Last Day, the Angels, the Book and the Prophets” [Al-Baqrah 2:177],

And with regards to Qadar, “Verily, We have created all things with Qadar. And Our Commandment is but one, as the twinkling of an eye.” [Al-Qamar 54:49-50].

In the Sunnah, the Messenger of Allah said, in answer to Gibreel when he asked him about Iman (belief), “Iman is to believe in Allah, His Angels, His Books, His Messengers, the Last Day, and to believe in the Qadar and what it brings of good or bad.” [Saheeh Muslim]