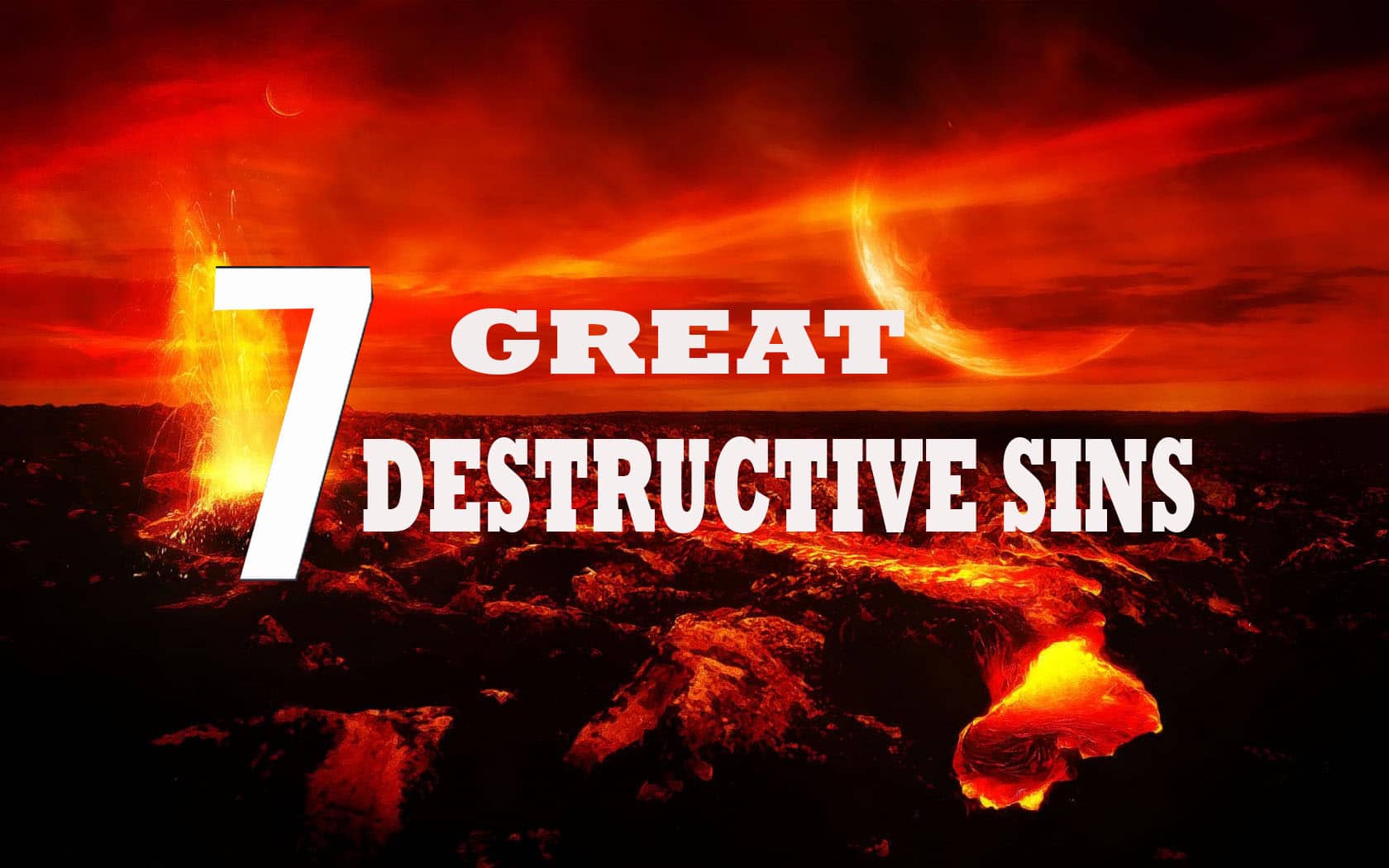 All Praise is due to Allah the Lord of the worlds. And peace and prayers of Allah be upon the most honorable Prophet and Messenger, our prophet Muhammad, and all his family and companions.
Dear kind brother,
The sins vary between grave and minor sins. Some sins are graver than others. The deliverer of the glad tidings and the Warner (prayers and peace of Allah be upon him) warned us from the all sins, whether they are grave or minor. In some situations, he described some of the sins with specific attributes, and he assigned signs for other sins in other situations. Among these sins are the seven great destructive sins.
Abu Hurayra (may Allah be pleased with him) narrated that the Prophet (prayers and peace of Allah be upon him) said: “Avoid the seven great destructive sins.”
“O Allah’s Apostle! What are they?” The companions enquired.
He said, “To join others in worship along with Allah, to practice magic, to kill the life which Allah has forbidden except for a just cause, (according to Islamic law), to eat up Riba (usury), to eat up an orphan’s wealth, to give back to the enemy and fleeing from the battlefield at the time of fighting, and to accuse, chaste women, who never even think of anything touching chastity and are good believers.” [Agreed upon]

Dear generous brother, the Messenger of Allah (prayers and peace of Allah be upon him) orders us to avoid these seven great destructive sins and warns us from committing them.
They are destructive sins because they destruct their doers in the worldly life and in the hereafter too.
Dear generous brother, in this Hadeeth, there are important rules for protecting the religion, honor, self, money and mind; thereupon, the Prophet (prayers and peace of Allah be upon him) warned us from committing these seven great destructive sins.
The first of these seven great destructive sins is polytheism:
If it was major polytheism (i.e. joining others in worship along with Allah) by worshipping a statue or sacrificing for anyone except Allah Almighty, it would be the gravest sin. This kind of polytheism turns its doer out of the folds of Islam and makes him an infidel. Allah Almighty says: {Verily! Allâh forgives not (the sin of) setting up partners (in worship) with Him, but He forgives whom He wills sins other than that, and whoever sets up partners in worship with Allâh, has indeed strayed far away} [Surat An-Nisa: 116]

Therefore, dear kind brother it’s a grave sin that perishes good deeds we invoke Allah, the Most Generous, to protect us from all kinds of polytheism.
The second of these seven great destructive sins is magic:
All kinds of magic (e.g. illusions, acts of devils after endearing the self to them by committing the sins to have their help in harming the hearts and the bodies by the will of Allah or using chemical substances to change pictures and the characteristics for planting fear) are great evil and grave sin. The majority of the scholars agreed upon counting magic as disbelief and considering the person who learns it as an infidel, because Allah Almighty says: {They followed what the Shayatin (devils) gave out (falsely of the magic) in the lifetime of Sulaiman (Solomon). Sulaiman did not disbelieve, but the Shayatin (devils) disbelieved, teaching men magic} [Surat Al-Baqarah: 102]

Transliteration: WaittabaAAoo ma tatloo alshshayateenu AAala mulki sulaymana wama kafara sulaymanu walakinna alshshayateena kafaroo yuAAallimoona alnnasa alssihra
This verse states clearly that the devils disbelieved because of teaching men magic. Allah Almighty said as description to the sayings of the two angels: {We are only for trial, so disbelieve not (by learning this magic from us)} [Surat Al-Baqarah: 102]

Transliteration: innama nahnu fitnatun fala takfur
The third of these seven great destructive sins is killing the life which Allah has forbidden except for a just cause (i.e. according to Islamic law): 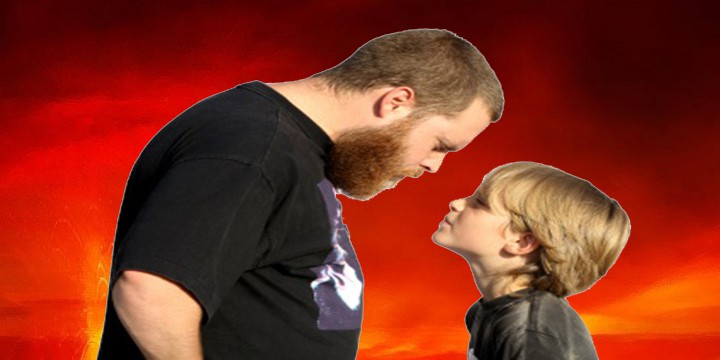 Killing the life without a just cause is a crime that causes disorder and chaos in the society. Islam protects the blood of the Muslim and protects the Muslim society from disorder and chaos; thereupon, Islam sentenced death for whoever kills a person without a just cause and he would be punished, that’s how life is saved by such punishment. He Almighty says: {And there is (a saving of) life for you in Al-Qisas (the Law of Equality in punishment), O men of understanding, that you may become Al-Muttaqun} [Surat Al-Baqarah: 179]

Transliteration: Walakum fee alqisasi hayatun ya olee alalbabi laAAallakum tattaqoona
Moreover, Allah sentenced the murderer with hellfire in the hereafter; Allah Almighty says: {And whoever kills a believer intentionally, his recompense is Hell to abide therein, and the Wrath and the Curse of Allah are upon him, and a great punishment is prepared for him.} (Surat An-Nisa: 93).

Transliteration: Waman yaqtul muminan mutaAAammidan fajazaohu jahannamu khalidan feeha waghadiba Allahu AAalayhi walaAAanahu waaAAadda lahu AAathaban AAatheeman
The fourth of these seven great destructive sins is eating usury:
We do not mean just eating; rather we mean all the kinds of dealing with usury whether it is eating, drinking, clothing or anything else. We refer to eating because it is the most common reason for dealing with usury.
Dear kind brother, usury is one of the gravest sins, because the Messenger of Allah (prayers and peace of Allah be upon him) counted it as one of the seven great destructive sins.
Moreover, Allah Almighty promised the usurers to destroy their usury gains; Allah Almighty says: {Allah will destroy Riba (usury) and will give increase for Sadaqat (deeds of charity, alms, etc.)} [Surat Al-Baqarah: 276]

Transliteration: Yamhaqu Allahu alrriba wayurbee alssadaqati
Also, He Almighty gave a notice of war to the usurers if they did not give up what remained from usury; He Almighty says: {O you who believe! Be afraid of Allah and give up what remains (due to you) from Riba (usury) (from now onward), if you are (really) believers. (278) And if you do not do it, then take a notice of war from Allah and His Messenger but if you repent, you shall have your capital sums. Deal not unjustly (by asking more than your capital sums), and you shall not be dealt with unjustly (by receiving less than your capital sums)} [Surat Al-Baqarah: 278-279]

Transliteration: Ya ayyuha allatheena amanoo ittaqoo Allaha watharoo ma baqiya mina alrriba in kuntum mumineena (278) Fain lam tafAAaloo fathanoo biharbin mina Allahi warasoolihi wain tubtum falakum ruoosu amwalikum la tathlimoona wala tuthlamoona
This is because usury brings grave evils to the majority of people; it is based on the belief of man’s freedom and his right to behave as he desires to gain money by any way whether it is lawful or unlawful. Eventually, this leads to a system that destroys humanity for the sake of a few usurers.
Dear Kind brother, you should know that some people may be deceived by changing the name of usury and calling it profits or benefits or any other names to make the person thinks that it is lawful. Dear generous brother, usury is usury whether it is called by that name or by any other name.
The fifth of these seven great destructive sins is eating up the property of orphans:
The orphan is the person who lost his father in his childhood and did not grow up to the maturity.
Islam cared for orphans’ properties and rights and assigned for every orphan someone to be responsible for his growing up, education, developing his money and training him to be able to care for his own affairs.
Allah has warned those who eat the properties of the orphans by His saying: {Verily, those who unjustly eat up the property of orphans, they eat up only fire into their bellies, and they will be burnt in the blazing Fire!} [Surat An-Nisa: 10]

Transliteration: Inna allatheena yarmoona almuhsanati alghafilati almuminati luAAinoo fee alddunya waalakhirati walahum AAathabun AAatheemun
Dear generous brother, you should know that the grave sins are not these seven sins only; rather there are other Ahadeeth and verses that mentioned other grave sins such as drinking wine, disobeying the parents, theft, illegal sexual intercourse and others.
Finally; I invoke Allah, the Most Generous, by His beautiful names and His exalted attributes to get us away from the sins whether they are grave or minor, and I invoke Him to keep us firm with the word that stands firm in this world (i.e. worshipping Allâh Alone and none else), and in the Hereafter too. Indeed He is able to do that. And prayers of Allah be upon our prophet Muhammad.
Dr. Oqail bin Abdurrahman Al-Oqail