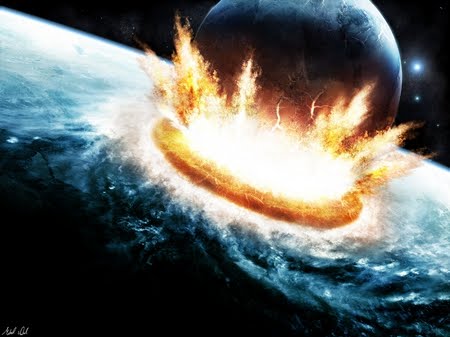 The Noble Quran and Prophetic narrations contain many references to the Hour (Day of Judgement) and both the major and minor signs which foretell its coming. Herein is a brief summary of the signs of the Day of Judgement. There are many books, articles, cassettes, etc., which discuss these in greater detail. These Signs are roughly listed in a chronological order, although this order is not necessarily precise, especially for those to happen in the future.

May Almighty Allaah enable us to recognize and heed these Signs, and strengthen us in the times of tribulation. Allaah Says (what means) “Are they waiting for anything except the Hour, to come to them suddenly? But its Signs have already come!” [Quran 47:18]

· The splitting of the Moon.

· The prophethood of Muhammad .

· The death of the Prophet Muhammad .

· A form of death, which will kill thousands of Muslims. (Understood to refer to the plague of Amwas during the caliphate of ‘Umar Ibn Al-Khattaab .

· A great fire in the Hijaz (in Saudi Arabia), seen by the inhabitants of Busra (in Syria). This took place in 654 H (Hegira)

· The Muslim conquest of Constantinople in 1453.

· A war between the Muslims and a reddish people with small eyes, wearing sandals made of hair (understood to refer to the Mongol Tatar invasion of the Islamic lands).

· A peace agreement between the Muslims and non-Muslims from the yellow race (Chinese, Mongols, etc.)

· Thirty impostors will appear, each one claiming to be a prophet.

· The slave-woman will give birth to her master or mistress (this refers to children disrespecting their mothers).

· A tribulation which will enter every Arab household (this may refer to TVs, satellite dishes and the internet-when misused).

· Knowledge will be taken away (by the death of scholars), and ignorance will prevail.

· Wine (intoxicants, alcohol) will be drunk in great quantities.

· A man will pass by the grave of another and wish he was in the latter’s place.

· Trustworthiness will be lost, i.e. when authority is given to those who do not deserve it.

· People will gather for prayer, but will be unable to find an Imaam (leader) to lead them in prayer.

The following are signs that did not take place yet, but the listing below does not reflect the sequence in which they will take place.

· The number of men will decrease, whilst the number of women will increase, until each 50 women will be looked after by one man. (According to a narration in the book of Imaam  Al-Bukhaari

· The Euphrates will reveal a treasure of gold, and many will die fighting over it, each one hoping to be the one who gains the treasure.

· The Romans (Europeans) will come to a place called A’maq or Wabiq, and an army of the best people will go forth from Madeenah to face them.

· The Muslim conquest of Rome.

· The Mahdi (guided one) will appear, and be the leader of the Muslims. ‘Eesaa (Jesus)

will descend in Damascus, and pray behind the Mahdi.

· Jesus will break the cross and kill the swine, i.e. destroy the false Christianity.

· The Antichrist will appear, with all his tools of deception, and be an immense trial. He will be followed by 70,000 Jews from Isfahan (present-day Iran).

· The appearance of Gog and Magog, and the associated tribulations.

· The emergence of the Beast who will speak to the people, telling them they did not believe with certainty in the Divine Signs. This

sign is among the major signs, and the scholars say that it will occur in the day where the sun will rise from the west.

· Jesus will kill the Antichrist at the gate of Ludd (Lod in present-day Israel, site of an airport and a major Israeli military base).

· A time of great peace and serenity during and after the remaining lifetime of Jesus.

· Wealth will come so abundant that it will become difficult to find someone to be eligible for alms (Zakaah).

· The Arabian Peninsula will become a land of gardens and rivers.

· Society will then decay.

· The buttocks of the women of the tribe of Daws will again sway in circumambulating (Tawaaf) around the idol Thul-Khulasah.

· An Abyssinian leader with thin shins will destroy the Ka’bah (Sacred House in Makkah).

· The huge cloud of smoke.

· The sun will rise from the west (its place of setting).

· A gentle wind, which will take the souls of the believers.

· There is no one left on the earth saying, “Allaah, Allaah” or “There is no god except Allaah.”

· Eventually the Day of Judgment is established upon the worst of the people, who copulate in public like donkeys.

· The blowing in the Trumpet by the Angel Israafeel upon which everyone will die.

· The second blowing in the Trumpet, upon which everyone will be resurrected.