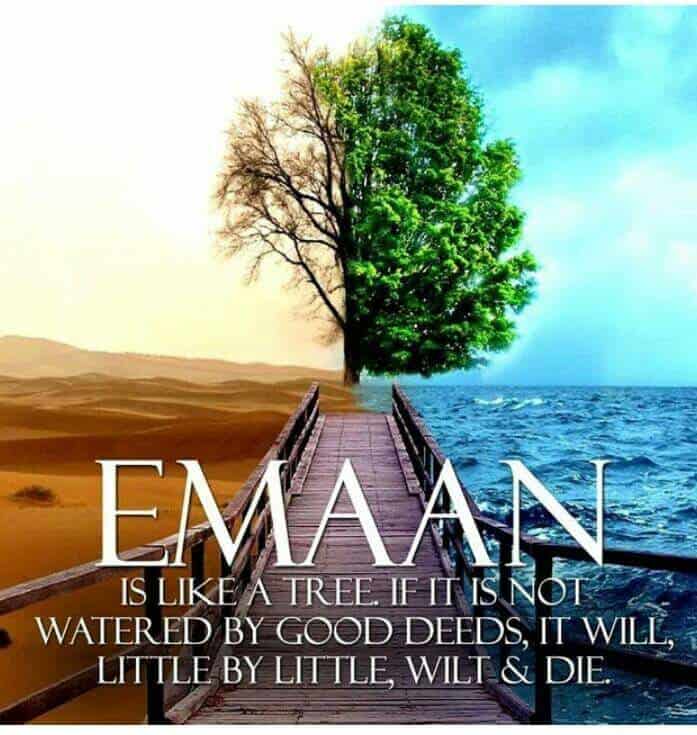 The word, Eemaan literally means, “to know,” “to believe,” to put one’s trust in something or someone.” In Islamic Sharee’ah (legislation), Eemaan means putting one’s entire trust in, and having complete faith in Allah, His Prophet and His message.

Therefore, one who puts his entire trust in Allah should not only testify to his faith by word of mouth, but must also accept it with all his heart and soul and then staunchly adheres to it physically. Furthermore, he is obliged to do good works in keeping with the fundamentals of the faith, as coinciding faith with right action is absolutely vital.

Acceptance of Allah as your Lord is like making a promise to place Him at the center of your life, so that He may become the pivot of your thoughts and emotions. It means entrusting yourself to Him entirely, and focusing all your hopes and aspirations, fears and entreaties upon Him. Then, instead of living for worldly things, you should live for the service of your Sustainer. He, Al-Mighty, will thus become all in all in your life.

A Muslim declares his faith by saying: “Ash-hadu Allaa Ilaaha Illallaah, Wa Ash-hadu Anna Muhammadun Rasoolullaah” (testify that there no god (worthy of worship) except Allah and that Muhammad is the Messenger of Allah) Its recital is called the Shahaadah.
For Muslims there are certain requirements, which have to be observed regarding the Shahaadah. They are as follows:

There are six things that are essential for a Muslim to believe in. These essential beliefs are pillars without which ones faith is not accepted. They are called the articles (or pillars) of faith.

2. The Angels: To believe in the angels who always obey Him and are His creation of Allah, and that Allah created them from light.

3. The Revealed Books: Allah revealed Books to His Prophets for the guidance of mankind. We must believe that all these Books mentioned in the Quran were revelations from Allah.

4. The Messengers of Allah: To believe in Allah’s prophets. We must believe in all the prophets and give them due respect.

5. The Last Day: To believe in the Day of Judgment and to believe that life in this world will come to an end one day and that everything in this world will perish. Then Allah will bring all beings back to life and will judge them according to all that they did while they lived on earth.

6. The Predestination and Divine Decree: To believe that everything comes from Allah. This means that Allah knows everything that is going to happen, whether good or bad, Has predestined for it to happen and decreed it.

Man too often lives for worldly objectives which come to dominate his thoughts and emotions and thus resulting in him leading a heedless life. The life that is truly worth striving for is that which is lived for the sake of attaining the pleasure of one’s Lord.

Man should live in remembrance of Allah. His name should be on his lips as he wakens and as he sleeps. As he halts or proceeds on his way, he should live in trust of Allah, and when he speaks or remains silent, it should be for the pleasure of his Lord.