Abû Hurayrah relates that the Prophet (peace be upon him) said “This religion is easy. No one becomes harsh and strict in the religion without it overwhelming him. So fulfill your duties as best you can and rejoice. Rely upon the efforts of the morning and the evening and a little at night and you will reach your goal.” [Sahîh al-Bukharî]

These words of the Prophet (peace be upon him) defines for us the concept of moderation in its proper Islamic context. When it comes to understanding the principles of Islamic Law, our definitions must be drawn from established sources and not purely from the discretion of the individual. Otherwise, our definition might yield a practical model that justifies nothing but itself. Many of our accepted and established principles have begun to take forms that represent only one narrow vision and that are unable to cope with the many demands of Islamic work and propagation.

The Prophet (peace be upon him) says: “ This religion is easy.” Ease is moderation. So our religion is moderate and we as a nation of people are moderate.

The Prophet (peace be upon him) then goes on to outline the defining qualities of moderation:

1. He says: “ So fulfill your duties…” The Arabic word used is “saddadû” which literally means to aim to hit something on target, like how an arrow hits its mark. This tells us that moderation never entails going outside of Islamic Law. The rulings of Islamic Law must be derived from the Qur’ân and Sunnah. The idea of ease and moderation in no way implies a relaxation of Islamic Law, nor does it imply that a person can follow his own inclinations in either his religion or his general dealings. Therefore, if we lose sight of Islamic Law and its rulings, an important quality of moderation will invariably be lost.

2. Then he says: “ …as best you can…” After providing the first quality of moderation, he complements it with this quality, so that those who are ill acquainted with the wisdom and purposes behind Islamic Law do not become insistent upon following a limited, personal vision in applying its rulings to themselves and others. 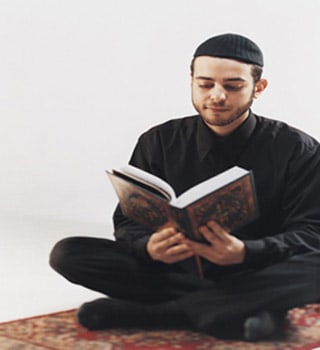 A person will not be able to fulfill his duties properly unless he realizes that he has limitations of mind and character that keep him from measuring up to those duties, no matter how clear and simple they may seem. Allah created Adam a creature with little self control. The human being cannot do anything perfectly without divine intervention, so this is why the Prophet (peace be upon him) says: “ …as best you can”, to indicate that perfection is not what is expected.

3. Then he says: “ …and rejoice.” He does this after defining moderation with the idea of fulfilling one’s duties to the best of one’s ability, which defines moderation in an abstract sense. Then we are told to rejoice.

Since working for the religion is a way of fulfilling our duty to Allah and of obeying His Messenger, we can see the importance of the glad tidings being referred to in this hadîth. Most of the problems and difficulties that exist between people are the result of partisanship and biases rather than on matters that are necessitated by Islamic Law. This is why sincerity to Allah in our actions has to be one of the principles of moderation.

4. Finally, he says: “ Rely upon the efforts of the morning and the evening and a little at night and you will reach your goal.” This shows us that one of the principles of moderation is to consider what is possible and to stay within those limits. This goes for an individual as well as for the environment in which he works. It also means that everyone should work within his own capacity and avoid being obstinate when dealing with others.

The principle of doing what is within one’s capabilities has both conceptual and practical dimensions. It means that we keep up our Islamic work while recognizing both the need for what we are doing and the limitations of our abilities. This gives us a good opportunity to embrace a large number of Islamic efforts of various types. We must never distance ourselves from others and their efforts unless they truly go against the established and indisputable principles and teachings of Islam. We should never do so on the basis of mere opinions and assumptions.

One of our problems is that the understanding of moderation that many people have does not comprise all four of these defining qualities. Some people overlook the need to adhere to Islamic Law in formulating their concept of moderation and come up with ideas that are ambiguous and ill-defined.

Others do just the opposite and go overboard in demanding perfection, though Allah demands from us only what is within our abilities, and that is with respect to the Law. Even less is expected of us in matters of juristic discretion. Today, however, many Muslims shun those who do not measure up to their opinions and views, and they are even more abhorrent to those who actually disagree with them.

The fact that many Islamic workers fail to understand the concept of moderation correctly is the reason why there is an inexcusable amount of confusion and contradictions to be found within the field of Islamic work today. We must praise Allah that, in spite of this problem, there is still a lot of good being carried out and there is still a lot of moderation and a lot that is praiseworthy.