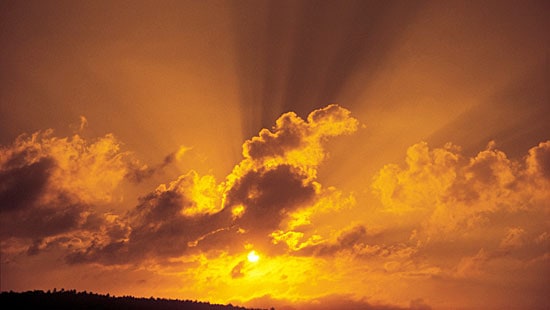 Can It Be Matter?
A very popular question among atheists is, ‘Granted that the existence of temporal things necessitates the existence of an eternal cause, why should that cause be the God of religion? Why can’t matter be eternal and be therefore in no need of an eternal creator?’ I shall argue, on an Islamic basis but at the same time also on a rational basis, that the attribute of eternity entails other attributes, which matter does not and cannot have, and cannot, in view of this, play the role of the original and ultimate cause of temporal things. Muslim theologians say that eternity of existence logically implies everlastingness. This is true because, if something is eternal then it does not depend for its existence on anything outside itself. If this is so then it can never pass away, because only those things pass away that lose some of the external conditions on which they depend for their existence. If the ultimate cause of temporal things is eternal and everlasting, it must of necessity be self-sufficient, qayyoom and ghanee.
Can there be more than one such creator? The Quran tells us that this is impossible;
“God never had a child, nor have there been any gods beside him. [Had there been any], each of them would have appropriated to himself what he created, and some would have overcome others.”1

This Quranic argument was paraphrased by some Muslims theologians in a way somewhat like the following: The assumption that there are gods beside the one true God leads to false consequences and must therefore be false. If there is more than one god, then (a) if every detail of everything in the world was the result of the action of one of the gods, it cannot at the same time be the result of the action of another god. But if (b) some things in the world were created by some gods, and others by other gods, then each god would rule independently over what he created, which means that nothing in his world can even in principle, be influenced by anything outside it. But this contradicts the observed unity and interdependence of the world. And if that is impossible, then (c) some gods will overcome others, but if that happens then the ones who are vanquished cannot be true gods. There can, therefore, be no more than one creator.
How does this creator create? Since He is self-sufficient, He cannot be said to depend on anything outside Himself in any actions, and cannot therefore be said to produce His effects the way natural causes do. But if He is not a natural cause, He must be a volitional agent. And since intention implies knowledge, and knowledge and intention imply life, he must be a living being. Since He is an eternal and everlasting being, all His attributes must reflect this quality; thus He must be not only knowing, but all-knowing, not only powerful, but all-powerful, etc.

Since no matter in any form can answer to these attributes, and since all these attributes are implied by the two attributes of eternity and everlastingness, no form of matter can be either eternal or everlasting, and thus no matter of any form can play the role of that ultimate cause. This much of the attributes that an eternal and everlasting creator must have is enough, I suppose, to show that it cannot be matter.
But this conclusion can be further confirmed by what modern science tells us about the nature of matter.

Why Should He Be The God Of Islam?
Some might say, ‘Granted that this god is a personal and living God, and that He has the attributes which you mentioned, why should He be the God of Islam and not, say the Christian or Jewish God?’ The God of Islam is the God of all true prophets of God from Adam down to Moses, Jesus and Muhammad. But it is a basic claim of the religion with which Muhammad came that previous religions (including Christianity and Judaism) have not been kept in their pristine form which those prophets advocated, but have been tampered with and distorted. The only religion whose book has taken upon itself to be preserved from any such distortions is the religion of the last of God’s prophets, namely Muhammad (peace be upon him). This is not to say that everything in those religions is false or bad. No! There is much in them that is good and true; it is only those elements in them that contradict Islam which must be false or bad. But even if they were to be purged of everything that is not in consonance with Islam, they would still be less perfect than Islam is, especially in their conceptions of God, therefore unsuitable for being universal religions.
Having said this, let me give one example of a non-Islamic religious belief which the Quran considers to be a stupendous blasphemy against God, namely that He has children. At the time of the Prophet, some Arabs believed that the angels were the daughters of God, while some Christians believed that Jesus was the son of God, and some Jews believed that Ezra was the son of God. Just as the Quran gave arguments for the impossibility of there being any gods besides the one true God, it also gave elaborate arguments to show the impossibility of Him having a child, whether male or female. If the Creator is one and self-sufficient, then He is also unique, ahad, “Nothing is like Him.”2 But if so then, “He neither begets nor is He begotten.”3 “How can He have a child if He has no consort, and if He created everything?”4 The Quran is here saying that the claim that God has children contradicts the facts (acknowledged by those who make this claim) that He is the Creator of everything, that He is self-sufficient, and that He has no spouse. Now if He is the creator of everything, this necessarily includes the one who is claimed to be His child. But if this is created by Him, it cannot be His child; it has to be one of His creations. One does not create one’s child; one begets it.

If it is insisted that the child is actually begotten and not created by God, this will entail the following false consequences:
1.    The begotten child must be of the same nature as its father, in which case God will not be unique or one.
2.    God will not be the creator of everything.
3.    God will have to have a spouse, who must of course be of the same nature as He is, otherwise they cannot beget anything.
4.    But in that case the number of beings who are of the same nature as God will be raised to three.
5.    If the child is begotten then it cannot be eternal, i.e. it cannot be of the same nature as the father.
6.    It must therefore be temporal; but in that case it has to have a creator. But if the God who is its father cannot at the same time be its creator, then there must be its creator, then there must be another creator besides that God the father; but in that case, this other creator will be the one true creator because it was through his power that the first one was able to beget its son. This will raise the number of gods to four.

No wonder than that the Quran said about those who claimed that Allah has a child,
“You have indeed come with something most monstrous, of which the skies almost burst, the earth split asunder, and the mountains fall down in utter ruin. All this because of their attributing a child to Allah.”
————————————————————————–
http://www.jaafaridris.com/English/Articles.htm