{Believers, it is unlawful for you to inherit women against their will, or to bar them from remarrying so that you may make off with part of what you have given them, except when they are guilty of a flagrant indecency. Consort with them in a goodly manner. Even if you are averse to them, it may well be that you are averse to something in which God has placed much good} [An-Nisaa’:19].

Nowhere in that area were human rights extended to women. Indeed, women were given a position much inferior to that of men so much so that they were more akin to inanimate objects. They were, at the same time, used for entertainment and pleasure, treated as sexual objects in order to satisfy carnal desires. Moreover, women were used as subject matter for pornographic arts and literature.

Islam came to purify women of all that filth, giving them back their natural position in order to play their role in the family and in human society. The position Islam gives to women is that which accords with the general principle stated at the outset of Surat An-Nisaa’ (Women):

{Mankind, fear your Lord, who has created you from a single soul, and from it created its mate, and from the two of them spread abroad so many men and women} [An-Nisaa’:1].

Islam also sought to raise the standard of feelings in marital relationships from the low animal level to their highest human level. It adds to them overtones of mutual respect, affection and care, and places them on a much more solid foundation so that they can withstand shocks and outbursts of temper.

{Believers, it is unlawful for you to inherit women against their will, or to bar them from remarrying so that you may make off with part of what you have given them, except when they are guilty of a flagrant indecency. Consort with them in a goodly manner. Even if you are averse to them, it may well be that you are averse to something in which God has placed much good} [An-Nisaa’:19].

This verse outlaws inheriting women altogether. Before Islam rescued the Arabs from the depths of ignorance into which they had sunk, some Arab clans used to consider that the relatives of a deceased man had an overriding claim to his widow.

They inherited her like they inherited his animals and property. Anyone of them could marry her if he so wanted. On the other hand, they could marry her to someone else and take her dowry for themselves. In other words, she was no more than an animal that could be sold at will. On the other hand, they could bar her from marrying anyone, leaving her at home until she bought her freedom from them.

Another tradition practised in Arabia, was one whereby if a woman became a widow, a relative of her deceased husband could throw his garment over her. This gesture was sufficient to assert his claim over her. It signified that she was now his, in the same way as if he had looted something. If she was pretty, he might marry her.

If she was ugly, he might confine her to his house until she died when he would inherit her, or else, she would buy her freedom by giving him money. If, on the other hand, she was quick to flee from her husband’s home, reaching her own family’s home before he could throw his garment over her, she was safe and free. 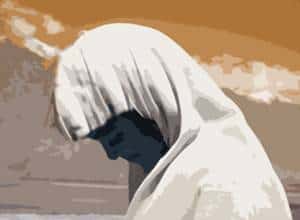 Some Arabs used to divorce women and stipulate that they could not marry anyone without the consent of their former husbands. The only way for a woman in such a position to regain her freedom was to refund her former husband part or all of the dowry she received from him when they were first married.

In other Arabian tribes, a widow was kept without marriage until a young boy became old enough to marry her. If one of them had an orphan girl under his charge, he would bar her from marriage until his young son grew up, when he would marry her, taking all her money.

There were many other similar practices that conflicted with the honourable view with which Islam looked at women, stating that both man and woman were two parts of a single soul. These practices degraded both women and men alike. For it transformed the relationship between the two sexes into a mercenary one.

It is from that low position that Islam raised the relationship between man and woman to such a high, honourable level befitting the dignity of man, whom God has honoured and placed higher than all His creatures. It is indeed the Islamic concept of man and human life that made the elevation of relations between men and women possible.

Islam outlawed any possibility of a woman being treated as part of a deceased man’s inheritance, like an animal or inanimate object. It also forbade the imposition of shackles and constraints on women that caused them harm, except in the case of their being manifestly guilty of gross immoral conduct. That, however, applied before the later punishment for adultery was prescribed.

Moreover, Islam makes women free to choose their husbands. That freedom is enjoyed by every woman, virgin, widow or divorced. Moreover, kind treatment, which is expressed in the Qur’an as {consorting with them in a goodly manner,} is a duty which applies to all, even when a man dislikes his wife. In this context, Islam raises the hope of what may come in the future, which is known only to God. This serves as a restraining factor, which makes man hesitate before severing a marital relationship in response to his initial feelings. It may be true that he is averse to his wife but it is also equally true that there is a great deal of good by which he may benefit if he restrains his feelings and continues to live with his wife:

The last part of this verse helps people to turn to God in hope. It restrains feelings of hatred until man has thought coolly about his situation. Thus, marital relationships are no longer like straw blown with the wind. Rather, they derive their strength from the permanent and strongest of all relationships, namely, the relationship between a believer and his Lord.

Taken with slight modifications from the author’s In the Shade of the Quran.