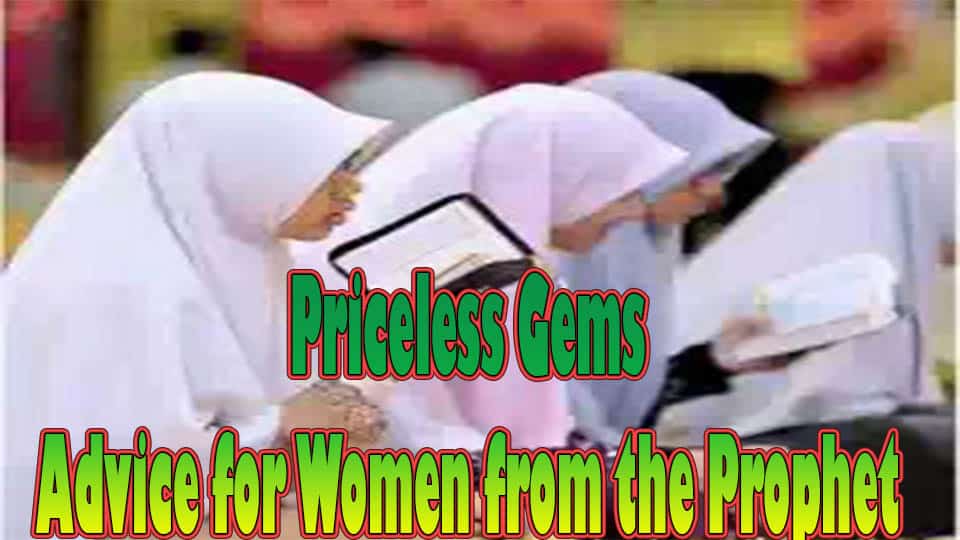 • The Messenger of Allah   said: “If a woman performs the five (obligatory) prayers, fasts the month (of Ramadan), maintains her chastity and obeys her husband, it will be said to her (on the Day of Judgment), ‘Enter Paradise from whichever gate you like’.” [Ibn Hibban] [Al-Albani: Saheeh]

• The Messenger of Allah   said: “O company of women! Give charity even from your ornaments, for you constitute the majority of the people of Hell on the Day of Judgment.” [Al-Bukhari and Muslim]

• The Messenger of Allah   further said: “I advise you (O women) to adhere to Tasbeeh (to say ‘Exalted be Allah’), Tahleel (to say ‘there is none worthy of worship except Allah’), and Taqdees (to say ‘Exalted be (Allaah) The Sovereign, The Pure, Exalted and Pure be the Lord of angels and Holy spirit’), and count with the help of your fingers, for they will be questioned and made to speak (to give witness to you), and be not heedless (of Thikr — remembrance) lest you would forget (to seek) mercy.” [Abu Dawood and At-Tirmithi]

• It was narrated that the Messenger of Allah   asked a woman of the Ansar (The Companions of Prophet   from Madeena) called Umm Sinan: “What prevented you from performing Hajj with us?” She replied, “There were only two camels used for carrying water owned by so-and-so (meaning her husband). He and his son offered Hajj on one, and the other was left to be used for irrigation.” The Prophet   said: “Then, ‘Umrah (to be offered) in Ramadan is equal (in reward) to Hajj or Hajj with me.” [Muslim]

• It was narrated on the authority of ‘Aa’ishah   that she said, “I said, ‘O Messenger of Allah! We see that Jihad (struggle for the sake of Allah) is the best of deeds; should we not engage in Jihad?’ The Prophet   said, “For you (women), the best act of Jihad is to perform Hajj that is accepted (by Allah).” [Al-Bukhari]

said: “There is no good in her. She is from the people of Hell.” They further said, “And such-and-such a woman performs only the (obligatory five) written prayers, and gives only yogurt as charity. However, she harms no one.” On that the Messenger of Allah   said: “She is from the inhabitants of Paradise.” [Al-Bukhari: Al-Adab Al-Mufrad] [Al-Albani: Saheeh]

• The Messenger of Allah   said: “By the One in whose hand the soul of Muhammad is! A woman will not fulfill the right of her Lord (perfectly) unless she fulfills the right of her husband fully; and if her husband asks her to have sexual intercourse while sitting on the back of a camel, she should not prevent him (from doing so).” [Ibn Majah] [Al-Albani: Hasan]

• It was narrated on the authority of Al-Husayn ibn Mihsan that one of his paternal aunts came to the Messenger of Allah   for a particular need, and when she finished her need the Prophet   said to her: “Do you have a husband?” She answered in the affirmative. He asked: “How are you with him?” She said, “I am never negligent in fulfilling his right except when I am incapable.” On that, he said: “Then, regard your position with him for he either leads you to Paradise or to Hell.” [Ahmad and Al-Hakim] [Al-Hakim and Ath-Thahabi: Saheeh]

• The Messenger of Allah   said: “No trouble, fatigue, anxiety, sadness, harm or distress befalls a Muslim, even a prick that he receives from a thorn, but that for which Allah forgives some of his sins.” [Al-Bukhari and Muslim]

O Muslim sister, remember the above mentioned Hadeeth (saying of Prophet  ), (narration), and hope for the reward from Allah The Almighty for whatever difficulties and troubles you meet in your life, like pregnancy, post-partum bleeding, suckling, raising children, menstruation, and so on, perchance your scale of good deeds will be heavy, your sins will be forgiven, and your rank will be elevated high in Paradise.