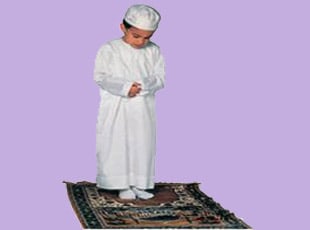 The Prophet Mohammad (P.B.U.H.) did not excuse any one from responsibility that Allah has put on every individual to build the Islamic society: the ruler is responsible: the man and woman are responsible…. all within their capabilities, domains, and authorities…, and the loss of Islam from our Muslim Ummah these days is nothing but a result of the neglect of responsibility…

Today, I want to talk about responsibility of men and women, fathers and mothers. This common responsibility, between the two, is to raise up, educate, and build the new generation in the correct method and the right way.

Allah creates the children with pure innate nature, without defects and whatever defects that happens later on is the result of the bad education. Imam Bukhari and Muslim reported that the Prophet (P.B.U.H.) said, “Every new born has the correct instinct, his parents make him Jewish, Christian or a fire worshipper.”

Allah has put in every person the good tendencies and the bad tendencies, so choose and testing will be performed, so parents must encourage and grow the good tendencies in the child so he can become a useful person that helps himself and his people. Allah (S.W.T) said in surat Atahrim, verse 6, which is translated as, “O’ you who believe, protect yourselves and your families from a fire whose fuel is men and stones.”

And the protection of yourself and your family from hell fire won’t be with anything but the good education, the practice of good morals, and the guidance to nobility.

Islam does not distinguish between male and female with regard to the Education requirements. Prophet Mohammad (P.B.U.H.) said, ”whoever had a daughter, tutored her on good morals, educated her well and fed her properly; she will be a protection for him from hell fire.” What do we mean by good education? The good education means the physical, mental and moral preparation of the child so he can become a good individual in the good society.

The physical preparation: Includes the care for the child’s body and his strength an through good feeding and following the correct methods in prevention and treatment of diseases.

The mental preparation: Includes everything that comprises the formation of the correct mental thinking, the ability of good judgment and the profound thinking and inference; so the child can understand his surroundings, judge things and benefit from his and the others’ experiences.

The moral preparation: includes the instilling and neutering of the best morals; also the discouragement and correction of bad morals and behavior.

For all the above there are methods and ways that help parents to reach their goal:

1. To make sure that the child is clean in his body, clothes, his surroundings and has a love of cleanliness in his life.

2. To make sure to feed the child from the good without excessive expenditure or stinginess.

3. To encourage the practice of sports such as running, swimming, shooting and riding, and their sports that make the body strong and active in a whole some atmosphere.

1. To teach reading and writing and to ensure a superiority in all kinds of knowledge and sciences.

2. To practice attentively looking at all creations and events around him which will enable his mental growth and give him the correct inference capabilities.

3. Touring or traveling in the land and pondering all the different marks and signs of Allah and the history of previous people and nations.

1. Showing the values of good deeds and their effects on the individuals and society; also showing the effects of bad deeds, all within the child’s capability of understanding.

2. Parents should be a good example in their behavior because children like to imitate their parents in their sayings and their deeds.

3. Teaching the child the religious principles and tutoring him in worship, taking into account the child’s capability of understanding. The Prophet Mohammad (P.B.U.H.) had said, “Order your children to pray at the age of seven.” 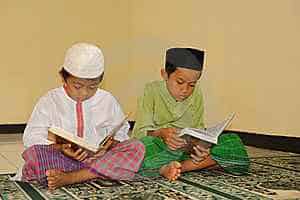 4. Treating children nicely and kindly; the Prophet (P.B.U.H.) taught us that practically. When he was praying as an Imam with the people, his grandson Al-hasan, son of his daughter Fatima, may Allah be pleased with, them rode his back while he was bowing, lengthened his bow. When he finished his prayer, some of the companions said, “You lengthened your bow? “Then the Prophet (P.B.U.H.) answered, “My grandson rode my back and I hate hastening him”.

5. One of the important things that parents must teach their children to select the good company and the avoid the bad, because children are always influenced by their company. The bad behavior can be transmitted through bad company. So Prophet Mohammad (P.B.U.H.) warned us by saying, “The person is following his company behavior, so every one must watch for his company.” (A good hadith reported by Imam Abu-dawoud and At-tirmithi.)

7. Growing the sense of distinction from society, and that does not mean arrogance because arrogance is forbidden: but it means the sense of being a Muslim and that Muslims are different from non-Muslims in their sources of belief and behavior. Clarify that the society is good and bad, so as a Muslim, take, and benefit from what is good and leave and avoid what is bad.

8. Growing the feeling of love of Allah, his Prophet, Muslims, and all people. This love will lead to special behavior towards all those loved.

This is a general guideline, so every Muslim can take care of his children and know the correct path that must be followed, so we can do the job we are entrusted to do as Allah proscribed, as well as the responsibility the prophet has clarified to protect the future generations of Muslims, as Allah said in surat At-tawbah, verse 105, what can be translated as, “And Say Do deeds! Allah will see your deeds, and (so will) his Messenger and the believers. And you will be brought back to the All-Knower of the unseen and the seen. Then He will inform you of what you used to do.”

(Extracted from a speech delivered by Imam Mohamed Baianonie)