The first contact with a woman is with one’s mother, who suffers in the pregnancy, delivery, nursing and rearing of her child. History does not recall a religion or a system which honors the woman as a mother and which raises her, as Islam does. Islam repeatedly commends the woman, and this comes directly after the command to worship and believe in the Oneness of Allah.

Allah has made honoring one’s mother a virtue and 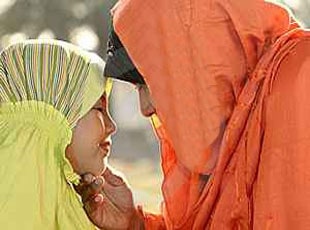 He puts forth the mother’s right over that of the father for what she endures in pregnancy, delivery, nursing and raising her children.

This has been honored and restated in the Qur’an, in multiple chapters, to imprint this notion in the child’s mind and heart as per the following verses:

“And We have enjoined on man to be dutiful and kind to his parents. His mother bears him with hardship and she brings him forth with hardship, and the bearing of him, and the weaning of him is thirty (30) months. [The Holy Qur’an, Chapter 46, Verse 15]

The status of women as mother has been restated in many Ahadith ( Sayings of Muhammad (PBUH)). 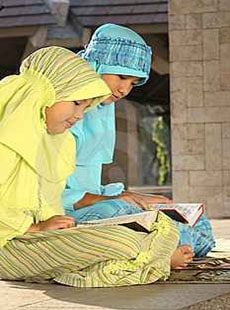 Al-Bazzar recounts that a man was circumambulating the Ka’bah carrying his mother. The Prophet Muhammad (PBUH) asked him, “Have you repaid her?” The man said, “No, not even for one of her moans (i.e. one of the moans of labour, delivery and so on) [Transmitted by Al-Bazzar (1872)]

As to be good to her, it means treating her well, respecting her, humbling oneself in front of her, obeying her without disobeying Allah, seeking her satisfaction and pleasure in all matters, even in a holy war. If it is optional, he must have her permission, for being good to her in a type of jihad. [Jihad is the struggle (physical, mental, psychological, spiritual, etc.) to preserve the purity and practice of Islam. ]

A man came to the Prophet (blessings and peace be upon him) and said, “O Messenger of Allah, I want to fight and I want your advice.” He asked him, “Have you a mother?” The man said, “Yes.” He said, “Do not leave her because Paradise is under her feet. [Transmitted by Al-Nisaai, 6/11; Ibn Majah, 1/278 and Al-Hakim. It is amended and approved by Al-Dhahaby, 4/151, on the authority of Muaaweya Ibn Jammah.]

Some religious laws before Islam neglected the mother’s relations, making them insignificant. With the advent of Islam, it recommended caring for uncles and aunts, both on the father’s side and the mother’s. A man approached the Prophet Muhammad(PBUH) and said, “I committed an offence, could I atone for it?” He asked, “Have you got a mother?” The man said, “No.” He asked, “Have you got a maternal aunt?” The man said, “Yes.” The Prophet (PBUH) said, “Be good to her. [Transmitted by Termithy in “Righteousness and Relations” (1905); Ibn Hibban Charity (EI-Ehsan) (435); and Al-Hakim who amended it on the terms of the two Sheikhs, agreed upon by Al-Dhahaby, 4/155, all on the authority of Umar.]

It is amazing that Islam commanded us to be good to a mother even though she is an unbeliever!

Asma’a bint Abu Bakr asked the Prophet (PBUH) about her relationship to her unbelieving mother who had come to her. He said, “Yes, be on good terms with your mother”. [Transmitted on the authority of Asmaa (agreed upon), The Pearl and the Coral (Al-Lu’lu’ wal-Marjan) (587).]

An indication that Islam cares for motherhood, for the rights of mothers and their feelings is that a divorced mother has greater rights and is worthier of looking after her children than the father.

`Abdallah ibn `Amr ibn Al-as transmitted that a woman asked, “O Messenger of Allah, this son of mine had my womb as a container, my breasts for drinking, my lap to contain him. His father has taken him from me.” The Prophet (PBUH) said, “You have more right if you do not marry”. [Transmitted by Ahmad in Al Musnad (6707). Sheikh Shaker said its authenticity is correct. Transmitted also by Abu Dawud.]

Imam Al-Khataby said in Landmarks of Traditions (Maalem As-Sunna): “Container” is the name of the place that contains a thing. This means that the mother is worthier as she and the father shared in the begetting of the child, then she was singled out for such things as nursing which the father had no share in. Therefore she deserves to be the first when it comes to disputes about the child.

On the authenticity of Ibn `Abbas who said, “`Umar ibn Al-Khattab divorced his wife from Al-Ansar, the mother of `Asim. He met her carrying the child in Mahser (a market- place between Quba and Medina). The child was weaned and could walk. `Umar held out his hand to take the child from her and disputed about it till the boy cried out in pain. `Umar said, “I am worthier of my son than you “They complained to Abu Bakr, whose verdict was that the mother should keep the child. He said, “Her scent, her bed, and her lap are better for him than yours until he grows up and chooses for himself “. [ Landmarks of Traditions (Maalem as-Sunna) (2181).]

The mother who is cherished that much by Islam and given all these rights have a task to perform. She has to take care of her children, raise them well, implant virtues, and make them loathe evil. She has to teach them to obey Allah, encourage them to defend what is truthful, not dissuade them from fighting for the saka of Allah (one form of jihad) because of the motherly sentiments in her heart but to favour the correct way over sentiment.

We saw a believing mother, Al-Khansaa, in the Battle of Qadesseyah eloquently urging her four sons to be brave and steadfast. Then as soon as the battle was over and the news of their four deaths came to her, she did not wail and carry on but said with certainty and contentment, “Praise be to Allah who honoured me with their martyrdom for His faith.”

Out of Qur’anic guidance, we have been supplied with superb examples of good mothers who had influence and position in the history of the faith in Allah.

Moses’ mother, for example, responded to Allah’s inspiration and calling when she cast the apple of her eye into the river, assured of Allah’s promise:

“And We inspired the mother of Moses, (saying): `suckle him (Moses), but when you fear for him, then cast him into the river and fear not, nor grieve. Verily! We shall bring him back for you, and shall make him one of (Our) Messengers.” [The Holy Qur’an, Chapter 28, Verse 7]

There is also Mary’s mother, who promised what she had in her womb to be devoted to Allah, to be pure of any polytheism or worship of anything other than Allah. She prayed to Allah to accept her vow:

When the child turned out to be a female, which she had not expected, it did not prevent her from fulfilling her vow, asking Allah to protect her from all evil:

“and I seek refuge with You (Allah) for her and for her offspring from Satan, the outcast” [The Holy Qur’an, Chapter 3, Verse 36]

Moreover, the Qur’an has made Mary (may Allah be pleased with her), daughter of `Imran and mother of the Prophet Jesus (peace be upon him), an example of purity, humility to Allah and of faith in His word.

“And Mary, the daughter of `Imran who guarded her chastity; and We breathed into (the sleeve of her shirt or her garment) through Our “Ruh” (i.e. Gabriel), and she testified to the truth of the Words of her Lord (believed in the Words of Allah “Be! and he was; that is Jesus-son of Mary;-as a Messenger of Allah), and (also believed in) His Scriptures, and she was of the Qanitun (i.e. obedient to Allah). [ The Holy Qur’an, Chapter 66, Verse 12]

From article “The Status of Women in Islam”