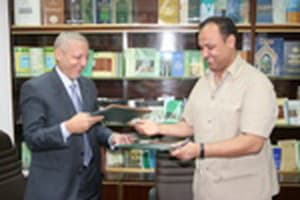 A mutual protocol was recently signed in Tripoli – Libya between Huda TV and the Libyan TV Channel “Altawasol” (owned by The World Islamic Call Society) in purpose of initiating a bilateral collaboration line between both channels as far media production, program exchange and staff training are concerned for the best interest of Islamic Da’wa and common interests.

It was also agreed that Huda TV will take part in coverage of main cultural and Islamic activities to take place in Libya.

The protocol was mutually signed at WICS premises by Mr. Mohammad Nasr Aljilani – Managing Director of Al-Tawasul TV and Mr. Ahmed Fahmy Regional Director of Huda TV. The signing ceremony was attended by a punch of Al-Tawasul / WICS staff members.

Both parties agreed to initially co-produce three new programs in English and to be subtitled in Arabic according to the minutes of this agreement.