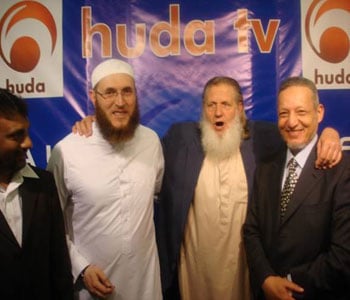 Huda booth at the exhibition of Dubai Int’l Peace convention – seen Sh. Yusuf Estes, Dr. Muhammad Salah and Mr. Ahmed Fahmy and Br. Abdul- Raheem one of Huda TV supporters in UAE enchanting for Huda…
A magnificent event “Dubai International Peace Convention“was held on 18th, 19th and 20th at Dubai Airport Expo. The peace convention was a great initiative to spread the messages of the universality of Islam on a global scale.
The event was held under the Patronage of H.H Shaikh Muhammad Bin Rashid Al-Maktoom, Vice President, and Prime Minster of the UAE and Ruler of Dubai.
The Convention started by a Jummah prayer conducted by Shk. Abdur Rahman Al Sudais – Imam of the Masjid-Al-Haram and inaugurated by a blessed Quran recitation of Shk Mishary El-Afassy – Imam of the Kuwait Grand Mosque.
The internationally renowned line-up of expert speakers from North America, Europe, Asia, and the Middle East shared their inspirational wisdom regarding the peaceful universality of Islam and the countless benefits of halal lifestyle.
Huda TV deployed a delegation to attend this event of Mr. Ahmed Fahmy- the Regional Director of the channel and Dr. Muhammad Salah – the Religious Advisor as well as our special guest Sh. Yusuf Estes who gave an infinite support to the channel and appeared several time at our booth for this reason – May Allah bless him..
The event featured also an exhibition alongside the convention where supporters & fans of Huda TV led by Br. Shiraz Merchant & his wife Sis. Razina as well as Bros. Muhammad Imran, Niaz Hussain, Jaafar Ali and many others had exclusively sponsored a booth for Huda TV equipped with banners and plenty of printed matters and hospitality. Supports of Huda especially from Kalema and Alhuda Islamic Centers had arranged some special events at their locations concluding themed lectures of Dr. Salah followed by Q & A sessions as well as dedicated dinner parties for in purpose of supporting Huda TV.
For all of them and other supporters of Huda TV in UAE we say Jazakum Allah khairan for your ever support of the channel and the Islamic da’wa activities in general. May Allah shower you and your families with His mercies and increase your Iman and make all of you steadfast in supporting the true deen for the pleasure of Almighty (SWT).
Huda delegates took the chance and paid several visits to potential sponsors among individuals and companies and we thank all collaborators for their support. 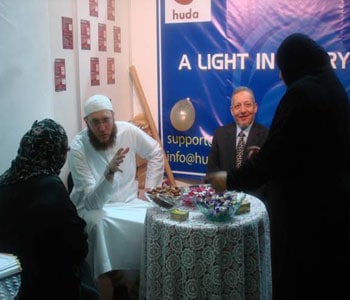 Lots of Huda TV’s supporters & fans queued up by the entrance of Huda booth at Dubai Peace Convention whereas Dr. Muhammad Salah was answering numerous religious quests and Mr. Ahmed Fahmy responded to inquiries about supporting the channel. 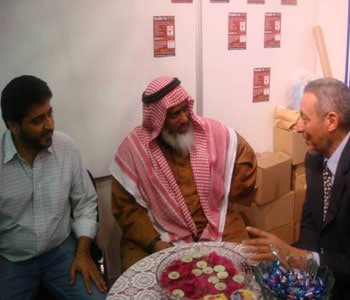 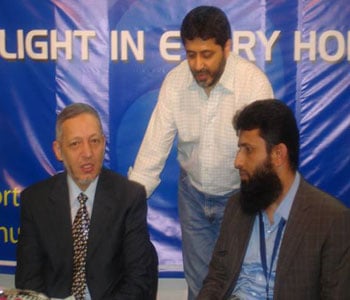 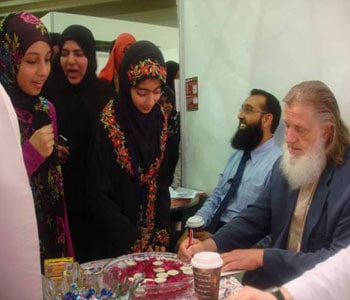