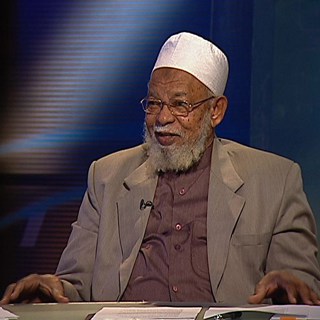 Dr. Jaafar Sheikh Idris is considered one of the few Muslim Scholars of this era, who has both the knowledge of Islam and Western Ideologies. He has written many articles and research papers on Islam. Because of his background he has visited many countries around the world, where he lectured in both Arabic and English about Islam.
Dr. Idris was born and grew up in Port Sudan, Sudan. During his childhood he studied Quran, Fiqh, Hadith and the Arabic language in the traditional schools in addition to attending public school.

During his youth he was influenced by the “Ansar al-Sunnah” group and studied Aqida with them. He went to high school in Hantoob, located in the province of Al-Jazirah. This was one of only three high schools in the country at the time. Admission to high school was very difficult, but he was accepted because of his excellent academic record. While still in high school he joined the Islamic Movement.
Degrees: Ph.D., (Philosophy), University of Khartoum/University of London, 1970. The topic of his Ph.D. thesis was “The Concept of the Causality in Islam”.
BA, (honors), Philosophy, (Economics, minor.), University of Khartoum,1961.
His works include:
Publications
A few articles, papers and pamphlets written in Arabic and English. Some of the English ones are:
“Islamic Social Science,” From Muslim to Islamic, Proceedings of the Fourth Annual Convention of Muslim Social Scientists, The Association of Muslim Social Scientists, Indianapolis, 1975.
“The Islamic Way of Developing Nations,” Islam and Development, Proceedings of the Fifth Annual Convention of the The Association of Muslim Social Scientists, Plainfield, Indiana, 1977.
“Human Nature and Human Values,” Qul Hadhihi Sabili, Journal of the College of Dawa and Communication, Riyadh, Saudi Arabia,1985.
“The Islamization of the Sciences: Its Philosophy and Methodology,” The American Journal of Islamic Social Sciences, 4:2, 1987.
“Is Man the Vicegerent of God?,” Journal of Islamic Studies, Cambridge University Press, U. K, 1990.
The Pillars of Faith, published by Muslim Students Association, Plainfield, Indiana, 1975.
“The Process of Islamization,” published by the Islamic Society of North America, Plainfield, Indiana, 1976.
“The Attributes of God, an Islamic point of view,” God, the Contemporary Discussion, Frederick Ontag and M Darrol Bryant, editors, The Rose of Sharon Press Inc., Ne  w York, 1982.