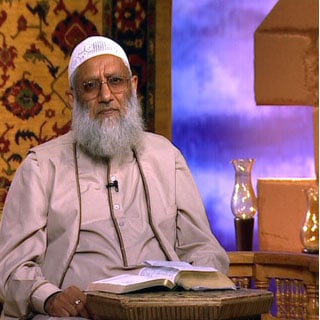 Shaykh Suhaib Hasan Abdul Ghaffar, born in India but brought up and educated in Pakistan.
After completing Islamic and Arabic studies (Fadil Arabic, 1960) and English language studies (B.A. 1962), he joined the newly-set-up Islamic University at Madinah, Saudi Arabia for higher studies in the faculty of Sharia.

He studied under a galaxy of prominent scholars such as Shaykh Abdul Aziz bin Baz, Muhammad Amin al-Shanqiti, Muhammad Nasiruddin al-Albani and later his father Shaykh Abdul Ghaffar Hasan. After graduating in 1966, he began his career as a teacher and worker in Islamic Dawa at Nairobi, Kenya on behalf of Darul Ifta.
In 1976, he moved to London where he engaged in Islamic Dawa especially through the forum of Al-Quran Society. Currently he is the chairman of Masjid & Madrasah al-Tawhid Trust and Secretary of the Islamic Sharia Council of Great Britain.
He presented two television programs for Huda Satellite Tv: Parables of the Holy Quran and His beautiful names.