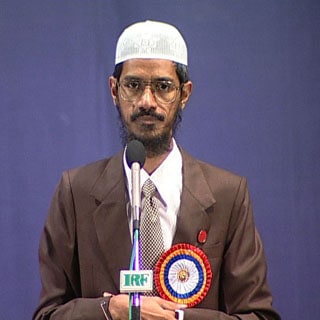 Born 18 October 1965. He is an Indian Muslim public speaker, and writer on the subject of Islam and comparative religion. Officially he is a medical doctor, having attained a Bachelor of Medicine and Surgery (MBBS) from Maharashtra, however since 1991 he has also been giving Da’wa (making an invitation), specializing in talks and debates regarding Comparative Religions.

For a few years he continued his practice as a Doctor and was also doing part-time Da’wa, however since 1997 he has been giving Da’wa full-time. He states that his main goal is to revive the crucial fundamentals of Islam in the context of modernity.
Naik says he was finally inspired by the late Ahmed Deedat who had him been active in the field of Da’wah for more than forty years. In 1994, Ahmed Deedat called Zakir Naik “Deedat plus”. In May 2000, Deedat awarded Zakir by presenting him a plaque with the engraving “son what you have done in 4 years had taken me 40 years to accomplish, Alhamdullilah” written on it.
Zakir Naik is the founder and president of the Islamic Research Foundation (IRF), which is a non-profit organization that owns and broadcasts the free-to-air global Peace TV channel from Mumbai, India.