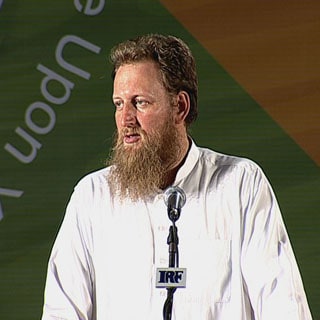 Abdur Rahim Green, was born to British parents in Darussalam in Tanzania in 1964.
He was educated at a famous Roman Catholic Monastic School called Ampleforth College and went on to study history in the London University. However, he left his education unfinished.
He was dissatisfied with Christianity since the age of eight. He was practicing Buddhism for nearly three years though he never formally embraced it.

His study of the Noble Qur’an immediately attracted him to Islam and he embraced Islam in 1988. He has been a Daw’ah practitioner in Britain since then.
He wears a look that instantly evokes comparison with the popular portrayal of the Prophet Jesus (Pbuh) in the imagery of Christian Europe.
Currently, he is working with an Islamic media company based in England and engages himself in da’wah activities including lectures on Islam in London’s famous Hyde Park. He is well known for his efforts at the renowned “Speaker’s Corner” in London’s Hyde Park.
He also delivers talks and lectures for Muslims, and concentrates on the pure teaching to the say of Prophet Muhammad (May God’s peace and blessing be upon him), and the early Muslims.