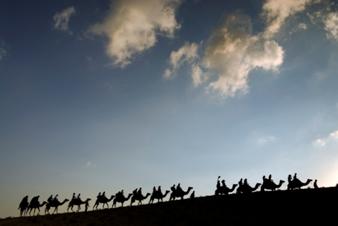 In the times of Umar (Radiallahu Anhu) there was a severe famine. All the people of Madinah were suffering due to the shortage of food. A caravan made up of a thousand camels loaded with a large stock of food grains belonging to Uthman (Radiallahu Anhu) arrived from Shaam (Syria). Several merchants offered to buy all of it. He asked them what profit they would pay. “Five per cent,” they said. He answered that he could get higher profit than that. They began to argue with him, saying that they did not know of any merchant who would offer him more than their quote. He said to them, “I know of one who repays a profit of more than seven hundred to a dirham (Arabian currency).” He then recited the verse of the Noble Quran in which Allah Ta’ala mentioned this profit. “The likeness of those who spend their wealth in the Way of Allah, is as the likeness of a grain (of corn); it grows seven ears, and each ear has a hundred grains. Allah gives manifold increase to whom He pleases. And Allah is All-Sufficient for His creatures’ needs, All-Knower.” (2:261).

“O traders! Bear witness with me that I donate all this to the poor people of Madinah!” said Uthman (Radiallahu Anhu).

Source: Related by Shaikh Habibullah Mukhtaar in his book “Bringing Up Children in Islaam” in the chapter of Generosity.

Dear readers, what ever we give for the sake of Allah is really ours and whatever we keep with us will one day be someone else’s. Let us follow the footsteps of our Prophet and the pious Sahabah, with whom Allah was pleased with, by helping the needy ones in this blessed month of Ramadan.