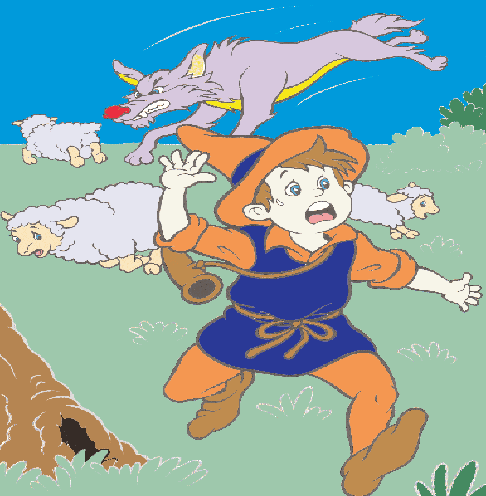 Once there was a shepherd boy who had to look after a flock of
sheep. One day, he felt bored and decided to play a trick on the
villagers. He shouted, “Help! Wolf! Wolf!”
The villagers heard his cries and rushed out of the village to help
the shepherd boy. When they reached him, they asked,
“Where is the wolf?”
The shepherd boy laughed loudly, “Ha, Ha, Ha! I fooled all of you.
I was only playing a trick on you.”
A few days later, the shepherd boy played this trick again.
Again he cried, “Help! Help! Wolf! Wolf!” Again, the villagers rushed up the hill to help him and
again they found that boy had tricked them. They were very angry with him for being so naughty.
Then, some time later, a wolf went into the field. The wolf attacked one sheep, and then another
and another. The shepherd boy ran towards the village shouting, “Help! Help! Wolf! Help!
Somebody!”
The villagers heard his cries but they laughed because they thought it was another trick. The boy
ran to the nearest villager and said, “A wolf is attacking the sheep. I lied before, but this time it is
true!”
Finally, the villagers went to look. It was true. They could see the wolf running away and many
dead sheep lying on the grass.

We may not believe someone who often tells lies, even when he tells the truth.