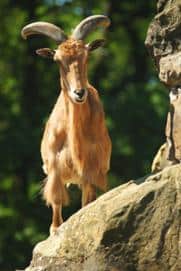 Once there lived a very pious elderly lady named Fiddah. She was kind and generous and always remembered Allah (SWT). One day Shaikh Abu-ar-Rabie (RA) went to her village. He had been told that she had a goat that gave both milk and honey. He bought a new bowl and went to see the goat. When he got there, he was shown the goat and he milked it. Sure enough, sweet white milk came gushing out. Shaikh Abu-ar-Rabie (RA) drank to his fill and then he asked they got the goat. She narrated to him an amazing story.

She said, “There was a time when we were very poor and had nothing but a she-goat. When Eid-ul-Adha came around, my husband suggested that we sacrifice the goat and have a feast. The she-goat was our only means of sustenance so I reminded my husband that Allah has not made it necessary for us to sacrifice an animal under such circumstances. Therefore, we spared the goat till the next Eid-ul-Adha. As chance would have it, we had a guest on that very same day. Since Allah has commanded us to entertain our guests, I asked my husband if he would now slaughter the animal and I would cook its meat for our guests. My husband took the goat outside behind a wall, lest the children should cry on seeing it killed. A little while later another goat appeared bearing an exact resemblance to our own. By Allah! This was a blessing. A miraculous she-goat that yields both milk and honey was sent down to us as recompense for feeding our guests.”

Lady Fiddah often reminded her children that the goat feeds on what grows in their hearts. “So long as your hearts continue to be noble and un-tarnished by evil, its milk will remain good and sweet, but as soon as your hearts become false, its milk will also turn bad. Guard your hearts against evil and Allah SWT will make everything beneficial for you.”