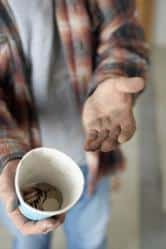 The following incident took place in Dhaka which is the capital city of Bangladesh.

There was a beggar in the city who used to beg beside a Masjid on Fridays after Jumah prayer. Begging was permissible for him due to his adverse condition. Though he was a beggar, he would pay attention to the sermons that were delivered during the Khutbah. One such sermons was about the importance of earning halal income. He learnt that supplications (dua) will not be accepted from those people whose income are from forbidden sources. He immediately decided to accept money from only those individuals that he knew had halal income. His daily earnings decreased as a result but he was committed to his decision.

Then came a day when the beggar died. Eventhough he lived as a beggar, his funeral was like that of a king. Many dignitaries of the area attended his funeral because they knew of that great sacrifice he used to make daily in order to keep up with the commandment of Almighty Allah.

Dear readers, we too should sincerely adopt the commandments of Allah in our lives regardless of our social status. In this way, Allah will elevate us in this world and in the hereafter.